World 3-5 is the fifth normal level of World 3 in New Super Mario Bros. 2. It is an underwater level filled with massive boulders that attempt to crush Mario or Luigi. This level is also the only level to feature Bloopers, which hide in pipes.

Mario begins in front of the pipe going underwater. A Roulette Block first appears, followed by a Blooper hiding in a pipe. More Bloopers can be found along with many coins. A boulder will then begin rolling down. A Blooper Nanny will then appear along with a P Switch which makes blue coins appear. A larger boulder will then appear. Further down is the checkpoint. A ? Block containing a Fire Flower follows along with more Bloopers and a Red Ring. A Hidden Block to the left of the arrow sign on a yellow pipe contains a 1-Up Mushroom. This is followed by more boulders and the exit pipe. Back on land are several stone platforms leading to the Goal Pole. 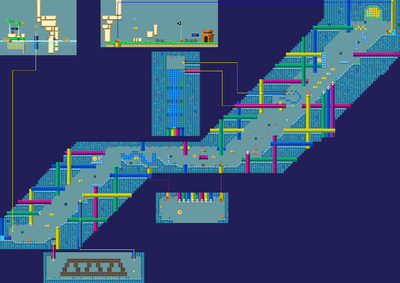