Grand Bridge is the sixth level of Yoshi's Safari. It is located in the Light Realm of Jewelry Land.

As the name implies, Grand Bridge is an excessively long bridge that snakes along above the water while ememies fly in or jump out of the water at Mario and Yoshi. Cheep Cheeps, Para Bombs, Green Shells, Koopa Para Troopas, and Flying Goombas are the enemies found here, with a Boomerang Brother as a miniboss. 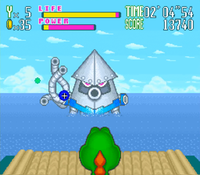 At the end of the level, the player battles Iggy Koopa. The Koopaling possesses a large mech whose appearance was based upon a Blooper with six cannons: one located in the end of each of his mech's six main tentacles. The mecha attacks by moving around while shooting green balls from its six main tentacles. After both sets of tentacles are destroyed, the mecha will begin leaping out of the water and shoot more green balls from its mouth, which must be shot. Once the mecha is completely destroyed, Iggy will be left floating on a piece of debris floating on the ocean, waving a white flag. After defeating Iggy Koopa and collecting the sixth gem, the duo continues on to Float Castle I.