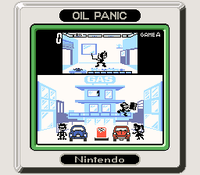 The Classic version of Oil Panic

The game is set in a gas station where a leaky pipe is dripping oil. The Station Helper must collect these drops in a bucket and dump them into his boss's oil drum so that he may take them to the cars waiting beside the defunct gas pumps. The Station Helper also needs to be quick, as the dripping oil is right above flammable sources that will cause a major fire if the droplets make contact with them (specifically, a smoking ashtray as well as two lit stoves). The bucket can hold only three drops of oil. For every drop of oil the Station Helper catches, he receives a point. He earns a point for dumping one drop of oil into the oil drum, two points for dumping two drops, and five points for dumping three drops. As the game progresses, the oil drips faster. If a drop is missed, if the bucket overflows, or if the Station Helper dumps his bucket on a customer instead of in his boss's drum, he loses one of four lives. If the player earns 300 points without any misses, another boss with an oil drum appears for 20 to 30 seconds, and any oil the Station Helper dumps into either boss's oil drum is worth double points. If the player has any misses at said score, all misses are removed instead. This game uses two miss counters: one for missed or overflowing oil, and the other for spilling the oil onto customers. If the player gets three misses from either of those categories, they receive a Game Over.

The Modern version of Oil Panic

The Modern version is even farther from the original in that Bowser is actively dumping the oil from on top of a castle, forcing Mario to collect it in not one but two buckets and give it to Yoshi for removal. Even if Yoshi is not close enough to Mario when he dumps oil to him, Yoshi can still catch it with his tongue. In this version, Mario earns three points for feeding Yoshi three drops of oil, six points for four drops, seven points for five drops, and 10 points for six drops. If Mario feeds Yoshi six drops of oil when Yoshi is on the edge of one side of the castle, he blows a fireball that creates a Rotating Block. If he creates four Rotating Blocks on the castle's left side, he scales them and blasts Bowser away from the castle, awarding the player 15 points. If Yoshi creates a Rotating Block on the castle's right side and blows a fireball on it, it releases coins for bonus points. If Yoshi is not facing the proper direction, the oil instead falls on either Luigi or Donkey Kong Jr. below, angering whichever one it hits. If the player has any misses at 200, 500, or 700 points, a ? Block appears on the castle's right side, and if Yoshi blows a fireball on it, it releases a heart, which removes a miss if Mario catches it. However, if the player gets a miss before Yoshi blows a fireball on the ? Block, the block disappears. The Modern version also features music, with the tempo changing depending on the speed of the game.

Appearances in other games[edit] 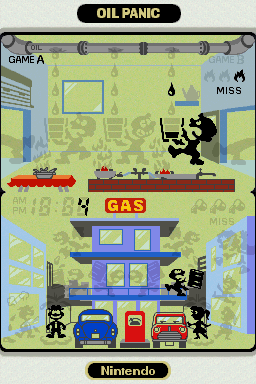 Because of the Nintendo DS's dual screens, another port of Oil Panic was released in Game & Watch Collection. Unlike the Game & Watch Gallery versions, this incarnation is exactly the same as the original Oil Panic.

Mr. Game & Watch's Oil Panic move in the Super Smash Bros. series is inspired and named after this game. It involves Mr. Game & Watch collecting projectiles instead of oil, and when the bucket fills, he dumps it on an opponent, causing them damage.

Oil Panic appears as a microgame in WarioWare: Touched! called Game & Watch Oil Panic. There is also a similar microgame called Drop in a Bucket.