Not to be confused with Fire (Game & Watch).

The alarm indicator of this game is musical notes that are located below the miss counter, and the cowboy plays the bugle when the alarm goes off. 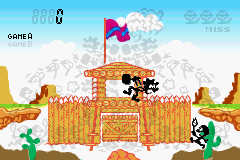 The Classic version of Fire Attack from Game & Watch Gallery 4

Fire Attack involves a cowboy who is using a hammer to try to stop attackers (represented as stereotypical Native Americans) from burning down his base. Every time the player hits a torch or an attacker, they receive two points. As the game progresses, the player has to be a lot more cautious as more attackers appear, and the torches and attackers eventually move faster. If an attacker manages to set the base on fire, the player will get a miss. If the player reaches 200 or 500 points without any misses, every torch or attacker the player hits will be worth five points for 30 to 50 seconds. If the player has any misses at either score, all misses will be removed instead. When the player gets three misses, they receive a Game Over. In Game A, attackers come from three directions, but they change positions and come from different directions after a miss is made. In Game B, attackers come from four directions, and the game gets faster sooner. In the Game & Watch Gallery 4 version, attackers have had their head feathers and cloths removed to make them appear as bandits instead, likely due to concerns over racial insensitivity. 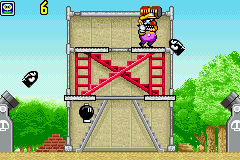 The Modern version of Fire Attack

The Modern version of Fire Attack involves Wario, who is trying to protect a giant golden statue of himself from a bunch of Bob-ombs and Bullet Bills. During his defense, however, Wario has to be careful not to hit any hens or apples, as they award him five and seven bonus points, respectively. The player is not penalized for hitting a hen or apple, but the player does get a miss if a Bob-omb or Bullet Bill manages to destroy parts of Wario's fort. However, Wario can remove a miss when he gets 200, 500, and 700 points by catching a heart coming from a Bill Blaster. It is Game Over if Wario's statue gets destroyed. This version also features music, with the tempo changing depending on the speed of the game.

If the player selects the game yet waits several moments to start it, a humorous scene is shown. In particular, Wario is using a hoe to till the ground as his hen is walking around near a tomato field. However, while Wario is taking a break to wipe off sweat, he is oblivious to a Bob-omb rolling up behind him. The hen notices the Bob-omb at the last minute and proceeds to flee. Shortly afterwards, the Bob-omb explodes, sending Wario flying.