According to MarioWiki:Importance Policy, those characters could have articles as a part of the Tertiary Focus with Captain Rainbow-only info, but yeah, I'm not sure if we should make them right now. I don't really see why we can't, though. YELLOWYOSHI398

Just a small question but where did we decide that we would be allowing this game as an article?

Uh... Cobold? About the having articles about characters not from the Mario series... *glares at Sonic, Roy, Ike, Pikachu, and practically everybody not from Mario in the SSB series* Marcelagus (T • C • E)
There is a difference. The Mario series is quite important in the Smash Bros. series and in Mario & Sonic at the Olympic Games. It's not important at all here. Compare this article to the show Captain N: The Game Master - we have an article on it because of Donkey Kong's role in it, but we don't cover it completely because the Mario part isn't big enough. - Cobold (talk · contribs) 12:43, 4 August 2008 (EDT)

It,s a bit early to tell how much Mario actually play part in the game. And frankly, I think we're giving way too much focus to SSB, I don't think it's a good example. Blitzwing (talk · gnome work)
I agree that these rules are somewhat contradicting, they are quite outdated. When they were written SSB was the only crossover game. With new creations like Itadaki Street DS and Mario & Sonic, they should have been revised. - Cobold (talk · contribs) 13:54, 4 August 2008 (EDT)

What do you suggest? Should we just get rid of the character articles for Super smash bros? And put the series itself into "Appearances in other games"? And Tetris DS, and all of those "Mario's-not-important-games"? Because personally, I don't think the Comic and TV series are very genuine Mario either. Marcelagus (T • C • E)

Would anyone happen to know who Tracy is from the newest Captain Rainbow trailer? I've checked and checked but all that comes up on Google is the Dick Tracy game for NES... http://youtube.com/watch?v=-OaeldV8JOA Mat rix 007 14:44, 30 July 2008 (EDT)

Hey I thought Birdo was married to Yoshi!! Bad Birdo...she and Yoshi will have to divorce. Yoshi should marry Goombella. Georgedrake Z

Some new screenshots recently appeared on the Japanese Amazon website. The Mario series relevant ones are these two shots: 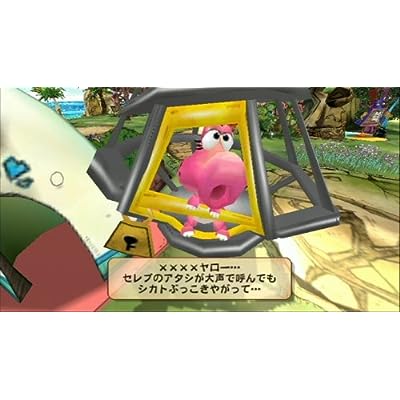 Birdo captured in a cage, as already seen in the second trailer. 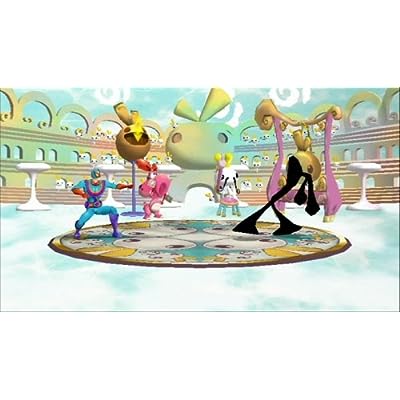 I don't really know. Seems to be some sort of duel between Captain Rainbow and that shadowy being. I guess that Birdo has a cheering role. Note the many rabbit-like creatures, who seem to appear very often in the game. --Grandy02 09:30, 5 August 2008 (EDT)

The story section is going to be a listing of the roles and wishes of all the (Mario-unrelated) characters instead of a general overview. I think this should be managed different. What would you think about making a list/table of the guest characters with name, game, picture and a short description, including the respective wish, similar to the tables in the Smash Bros. and Assist Trophy articles? The roles of Mario beings (currently only Birdo and Piranha Plant), of course, deserve detailed descriptions. Or would you even rather completely leave out the roles of non-Mario characters? --Grandy02 14:10, 6 August 2008 (EDT)

Not covering non-Mario characters at all is the way the Captain N article handled it. We could have a list of other characters in the game but not describe them further. When we find a site which covers the entire game well enough we could put it into the External Links section for those interested in more. - Cobold (talk · contribs) 14:06, 8 August 2008 (EDT)

Right now we know so little about the game. If it turns out that Birdo only has a very small role, we might only want to cover that. I just think that right now it is too early to decide. Stumpers! 15:15, 8 August 2008 (EDT)

Okay, thanks for answer. I wrote general sections about the story and gameplay, moved the Birdo information to an individual section and removed all information about the other characters but the list. BTW, the Japanese site went online: [1]. --Grandy02 07:49, 9 August 2008 (EDT)

This video shows how Nick/Rainbow saves Birdo by finding the object in her house which proves that she is female (this object might fall under "questionable content", but it is "censored" by a question mark):
http://www.wipido.com/video/6vQWLdwGZsEq
--Grandy02 14:17, 29 August 2008 (EDT)

Wow! her house it's Big!!, and beautiful!, Birdo is a rich girl?

By granting a character's wish, a gallery with some concept art of the character and the respective home will be unlocked. That also goes for Birdo, of course, see this video (and of course, she looks weird). Birdo's theme (with "lalala" lyrics) also plays in her gallery. Naturally, I would like to upload the three images here, but where should I place them? Would Beta Elements be the right place? And does anybody know what Birdo does in the third picture? --Grandy02 11:31, 18 September 2008 (EDT)

You could make a separate section, called "Birdo's Gallery" or something. You can describe what it is as you did above and then have the pictures within the section. Stumpers! 18:59, 18 September 2008 (EDT)

what are the other fish catchable in the minigame?
The preceding unsigned comment was added by Lu-igi board (talk).

I don't know, but I guess they are mostly generic fish not relevant for this wiki. If you want to know where the info about the Cheep-Cheeps and Bloopers is from, it was told by the nice person who also subbed all the character trailers. --Grandy02 12:54, 18 September 2008 (EDT)

I really don't think this game should be a major article on the wiki. It only has a few refrences to mario, and should just be put in sightings. MisterJaffffey