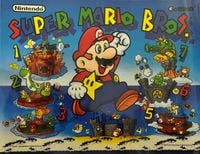 Most underappreciated artwork ever

Status: Have a job now, time online may be sporadic.

Hello there! I am Doc von Schmeltwick. I lurked on this site since about 2008 (I remember Bowser's Inside Story and NSMBW getting announced long after I had discovered this site), then finally joined on May 15, 2017! I really enjoy the Mario games, as well as many other things. I currently am 21 years of age. I am also a spriter, my TSR thread for some of my posted sprites can be found here :3.

Additionally, I am the depraved maniac who wrote the Peachette page, thus unwittingly giving that friggin' "Bowsette" meme some manner of pushing forwards. Fear meeeeee!

I wanted to keep this on a whim, lel

Note: Don't expect me to be available on Sundays during the school year, I am typically busy on those for most of the day.

So you've gotten into a debate with me

Want some tips into effectively arguing with me? For starters, if I start a debate acting on-the-fence suggesting a change, do not under any circumstances attempt to shut it down with a "no that's 100% impossible." Instead, take a more ambiguous approach like I'd started with. Basically, the more you push, the more I'll push back. I'm like Canary Mary from Banjo-Tooie in that regard. Additionally, "this is an English Wiki" is not now and never will be an argument. It may be an English wiki, but it's a predominantly Japanese franchise, so not looking at it from an international perspective is disingenuous and helps nobody.

Wikis I can also be found on

Note: I rarely update the below lists, so don't be surprised if there's a lot missing. Particularly with images, I tend to mass-upload those.

Pages I've Created (that are still around, by time)

Pages I've Saved (may not be complete)

“I am a Wario Renaissance”
—Me, after discovering my edits of Wario Land 3 caused some reinterest to be sparked in the game, both here and on The Spriter's Resource

And a bunch I haven't put down yet. Basically look here.

Mario Games I own

Also I despise Wizzerds and Elite Wizzerds, but then again, everybody who isn't a masochist does.