This article is about the character from Super Mario Sunshine. For the recurring character that first appeared in Luigi's Mansion, see King Boo.

King Boo is the leader of the Boos on Isle Delfino and appears as a boss in Sirena Beach, the fifth world of Super Mario Sunshine. He appears to be made from goop, which can be seen during his defeat. He dislikes spicy food, which serves as the key to defeating him.

While he was named King Boo in the localizations, the original Japanese version assigned him the same name as the Big Boos fought in Super Mario 64 and later Mario Pinball Land (ボステレサ, meaning Boss Boo), though both of those also have an additional different Japanese name.

King Boo with his roulette 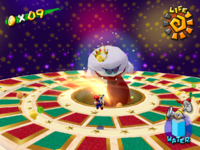 King Boo appears as the boss of episode five of Sirena Beach, King Boo Down Below.

While Mario is searching Sirena Beach for Shine Sprites, King Boo takes up residence inside the basement of Hotel Delfino's casino. Down there, he produces enough noise to alert the hotel manager, who proceeds to inform Mario of the ghost's presence. The player can access the casino's basement by having Mario Ground Pound the purple tile on the giant roulette wheel. The inner ring of the wheel then descends, and the battle against King Boo starts. Players have no control over the camera during the King Boo boss fight.

King Boo's primary strategy in this boss battle is bringing out a giant slot machine with images of pineapples, coins, Stus, and question marks. Spraying King Boo with water will cause him to activate the slot machine with his tongue. If the player waits too long to do this, King Boo will start to send out smaller Boos to attack Mario. Once the slot machine is activated, all Boos will disappear, and there are five possible outcomes that determine how the battle will proceed.

To get a chance to damage King Boo, the player needs to get three pineapples on the slot machine. To harm him, the player needs to have Mario pick up a pepper to set the ghost's tongue on fire, and then hit him again with any other available fruit. If he is hit without having his tongue disabled beforehand, King Boo will be harmlessly splattered and lick the fruit off him before laughing. After three direct hits with any fruit while vulnerable, King Boo will be defeated and release a Shine Sprite. Depending on the fruit used to defeat him, he will explode into the color the fruit turns Yoshi into: pink for bananas or a coconut, orange for a pineapple or a pear, and purple for a durian. 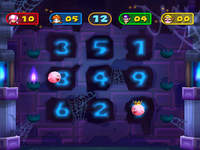