King Boo Down Below

King Boo Down Below is the fifth episode of Sirena Beach in Super Mario Sunshine. The episode's objective is to defeat King Boo. 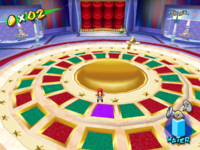 The purple panel Mario has to Ground Pound.

This episode takes place in the casino, so the player needs to talk to the bellhop on the first floor of Hotel Delfino to be let in. One of the Piantas in the casino will state that the purple panel on the giant roulette wheel is abnormal, and Ground Pounding the unusual panel will lower the center wheel, taking Mario to the arena where King Boo is fought.

The arena is made up of three roulette rings, each with one purple panel on them. The inner and outer ring will spin in the same direction with the middle ring spinning in the other direction. The player can stop the spinning by Ground Pounding the purple panel on a ring. King Boo will appear in the center of the rings and he has a slot machine underneath him that will determine his attack. Spraying King Boo with FLUDD will make him spin the slots, which can land on either him spitting out fruit, enemies, coins, or bubbles. Among the fruit King Boo will spit out are peppers and throwing them back at him will cause his tongue to catch fire. During this period, the player needs to throw another piece of fruit at King Boo to damage him. After taking damage, King Boo will recover his slot machine and any stopped roulette rings will start moving again. The player needs to repeat this process two more times in order to defeat King Boo.

The enemies King Boo spits out are two Bloopers, Strollin' Stus, and Smolderin' Stus. If the player bursts the bubbles that come out, they can refill FLUDD's tank.