The Super Mario Wiki is a database focused on all aspects of the Mario series, including spin-off series and crossover series. What distinguishes this wiki from other video game wikis is that we not only cover our primary series, but also all other sub-series and games which have emerged as their own distinct franchises in the greater Mario series. Crossover games, such as the Super Smash Bros. series, are also covered here, but from the perspective of the Mario series. This guideline is here to help users determine what content is and is not acceptable for inclusion in the Super Mario Wiki.

Based on MarioWiki:Canonicity, there is no "canon" regarding the Mario franchise. Since there is no canon, we cover any "Mario related" media product given some sort of official authorization by Nintendo at some point in time, be it through the Official Nintendo Seal or a contract with another company, etc. All content from such sources is allowed on this wiki, without speculating on what content from what source is "more official" than other content from other sources. As Nintendo has never established an official canon regarding the Mario series, we cannot say newer or older Nintendo games, media, content, policies, etc. are more "official" than the others. They are all essentially as "official" as each other.

What the Super Mario Wiki covers 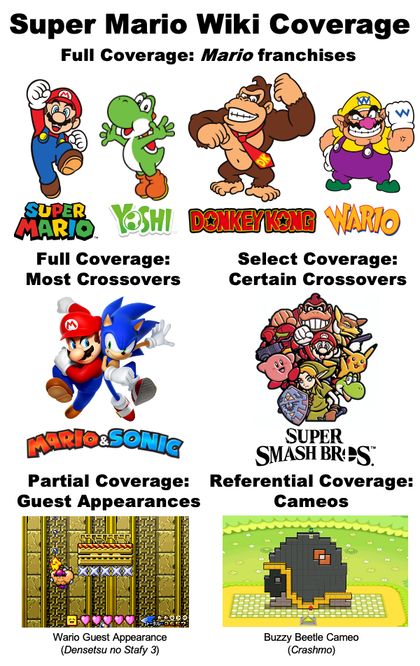 A visual for what we're talking about.

The games and other media products we cover can be divided into four categories: the Mario series itself, crossovers, guest appearances and cameos.

As there is no official canon, content from any official source from Nintendo related to Mario and his universe is allowed. As far as the "universe" goes, we cover all franchises, series, games, etc. that have emerged from or spun-off from the original Donkey Kong arcade game, Mario's first appearance in any media. Collectively known as the Mario series, this includes spin-off partner series like Wario, Yoshi, and the Donkey Kong series itself, as well as the core Mario games and related media and merchandise (which may include games that do not necessarily have "Mario" in their names, such as Luigi's Mansion or Wrecking Crew). Everything in this overall Mario series is given full coverage, meaning every character, place, item and everything else found in the releases are given articles. Individual game levels, TV show episodes and stand-alone comics all get articles as well, as do the games, shows, movies, and publications themselves.

Please note that while Banjo and Conker both debuted in Diddy Kong Racing, their series are not included in the Super Mario Wiki's coverage, as they are not considered spin-offs of Diddy Kong Racing (and by extension, the original Donkey Kong), since the characters were designed for their own series and their appearance in the racing game was more of a crossover.

Crossovers are games that extensively feature characters and other elements from one or more series in addition to the Mario series. Examples include:

In some cases, the games are obviously part of the Mario series (i.e. Mario Sports Mix), while others are more evenly split between the franchises (i.e. Mario & Sonic or Fortune Street) but should still be counted as Mario games. Even series that can stand alone as their own set of games separate from any of the contributing franchises (i.e. Super Smash Bros.) are considered to be partner series of the Mario games. Except for the Super Smash Bros. and Game & Watch Gallery series (see below), these crossovers are given full coverage: everything appearing in the games gets articles.

Giving full coverage to crossovers means that the characters and other aspects originating in the other series involved in the crossover are also given articles, however these articles must be limited to the non-Mario subject's role in the crossover game itself. For example, our article about Link talks about his role in the Super Smash Bros. games, but does not go on to discuss what happens in any of The Legend of Zelda games, although a brief overview about his role in the series is permitted in the article's introduction.

The Super Smash Bros. series features representative characters, locations, and other elements from numerous Nintendo franchises, and the Mario franchise is notably present. Its games feature enough content from the Mario franchise that calling it a guest appearance is incorrect, but at the same time, it is not so comprehensive that it is a crossover. To avoid any lapses in our coverage, the series is deemed an exception to the standard coverage policy. This means that unlike crossovers, in which every element is given an individual article, and unlike guest appearances, in which only the game itself and uniquely Mario elements get individual articles, pages for the series are decided on a more particular basis.

In addition to the Modern, Mario-themed versions of Game & Watch games, the Game & Watch Gallery series features a number of ported Game & Watch games as extra content. Due to these not being directly part of the central crossover nature of the game and having no in-game association with the Mario franchise, those that have not received Modern remakes or are not a Mario-series Game & Watch game to begin with (e.g. Mario's Cement Factory) are not covered as separate articles, otherwise the series is given full coverage.

When a Mario character appears in another franchise (including stand-alone releases), it is either a guest appearance or a cameo. The difference is how much impact the Mario character has on the game: if they have a role in the plot or are featured as a playable character, it is a guest appearance, whereas if they can be erased without any ill effects on the game, it is a cameo. The difference between guest appearances and crossovers is that in a guest appearance, the amount of Mario content relative to the other series is very small, whereas in crossovers there is an extensive amount of Mario content, ranging from mostly Mario like in the Game & Watch Gallery games to a 50:50 split like Mario & Sonic, to simply being one of many franchises represented in a crossover like SSB.

Games that Mario content makes a guest appearance in include Tetris for the Game Boy, NBA Street V3, SSX on Tour, Captain Rainbow, Densetsu no Starfy 3, Punch-Out!!, Nintendo Land, Nintendo Badge Arcade, Rhythm Heaven Megamix, Tetris DS, Skylanders: SuperChargers and Minecraft. Non-game guest appearances include Captain N: The Game Master, Pixels, The Wizard, and Wario to Saikyou Tag da Fii!. These guest appearances are given partial coverage, meaning only the media itself get articles, such as the game or television show, with all information pertaining to their content being confined to those pages. However, if a subject is unique to the game while also being clearly derived from the Mario franchise, they can receive individual articles. For example, certain minigames from Nintendo Land, which includes Donkey Kong's Crash Course, Luigi's Ghost Mansion, Mario Chase, and Yoshi's Fruit Cart, prominently feature Mario images and icons, and therefore have articles. Other minigames, such as The Legend of Zelda: Battle Quest or Pikmin Adventure, do not have articles on the wiki.

Please note that a Proposal should be made before a game is classified as a "guest appearance", as this is a somewhat tricky distinction and there could easily be disagreement in the community about the extent to which coverage should be granted to any given non-Mario game.

As mentioned before, if a Mario character or some other aspect of the Mario series makes a minor appearance in a non-Mario game, this is called a cameo. Cameos have no effect on the overall games they occur in, unlike guest appearances, and are merely included by the developers and writers for fun. All cameo appearances are limited to the Reference pages, although the cameoing Mario content's article may also mention the cameo (but this is not always necessary). The non-Mario game, show, movie or publication in which the Mario content is cameoing should not get an article.

For example, the Thwomp article has a section about the Thwomps' appearances in The Legend of Zelda series, but the material included in this section only pertains to Thwomps and does not talk about unrelated Zelda material, and the Zelda games that Thwomps appear in are not given articles.

On rare occasions, there are games that have had a notable impact on the Mario franchise despite not being a part of the franchise in any way. Currently, the only example of this on the Super Mario Wiki is Yume Kōjō: Doki Doki Panic: while the game itself has no relation to the franchise (barring how it started off as a tech demo in the vein of the Mario games), it was later repurposed to become Super Mario Bros. 2 with only a handful of changes. As a result, many elements that were introduced to the franchise in Super Mario Bros. 2, including Birdo, Shy Guys, Bob-ombs, and Pokeys, actually first appeared in Yume Kōjō: Doki Doki Panic. Due to the game's importance in creating aspects that are now common to the franchise, it is covered on this wiki. However, since it is not properly a part of the franchise, only the game itself is given an article, while elements unique to it (such as its main characters) are covered within said article.

In some instances, an installment of the Mario franchise may be released or legally tied with another, otherwise unrelated work without any crossover happening. The Super Mario Wiki staff does not deem pertinent to fully cover these unrelated works, although information about the "bundle" should be present on the relevant page

Examples of this situation include: