Should there be a template for the kingdoms? Frum LANKY KONG !

Do it. If we don't need it later, it can be taken care of. Be decisive.=)SaudyTalk!

Okay, I made one. Frum LANKY KONG !

Here is the box art of the Japanese Wii version: 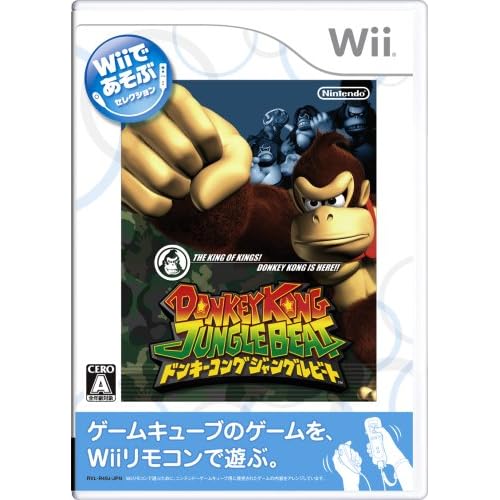 The Japanese site for the Wii version features the game's story - in Japanese, of course. I've read that it tells that the other pictured Kongs stole DK's bananas. http://www.nintendo.co.jp/wii/r49j/prologue/index.html --Grandy02 14:57, 3 December 2008 (EST)

What exactly makes this game a spin-off of the Donkey Kong series? It's a platforming game with only different controls. I'd say it's part of the main series. - Cobold (talk · contribs) 14:36, 10 January 2009 (EST)

Yeah, spin-off is not a good term to use, although I wouldn't say this was part of the Donkey Kong Country series or anything like that. Just a part of the general series. -- Son of Suns (talk)

After Donkey Kong 64, because I believe it was released after that but before King of Swing. -- Son of Suns (talk)

Does the Banana Banquet level even exist ? Nobody made an article of it yet (as if nobody knew anything about it) and there are no videos of it on Youtube. Koopalmier 00:56, 20 June 2010 (UTC)

In my version of Jungle Beat (Wii), the levels stop after Cactus King. Am I forgetting to do something? Is this exclusive to the Wii version? Is my version a dud? Magikrazy51 (talk)

This kind of question would be better off on the forums. Bop1996 (Talk)

First of all, never mind (Sorry for wasting your time). Second of all, my account is inacessible for some reason. Magikrazy51 (talk)

According to Naming, development names are low-tier acceptable sources for article names and can take precedence over foreign names. Debug material is listed as an example, and since Super Mario Galaxy has internal names for the Jungle Beat leftover model data, I'm wondering if this can be instead used for those pages. The following have named counterparts in the Galaxy game disc:

I agree that the names should be moved, but how are you planning on naming CocoPig and RushAirFish / NeedlePoppo? Keeping them as mashed-together name just looks off, and there's at least one example of a filename ("spyguy_anim.bin") being expanded into something more legible ("Spy Guy"). Hello, I'm Time Turner. 12:28, 20 July 2017 (EDT)

Following up, I've compiled a list of Donkey Kong Jungle Beat internal names for article titles currently with foreign tags. All of these are derived from .arc files in the game disc's ObjectData directory (both versions):

Some of these (namely NoFin, NoMouth and OnlyHead) are probably unsuitable. BlackClione also seems to be an oddity - Clione describes it, but Black decidedly doesn't (perhaps the name was supposed to be "BakkyClione"?). The rest of these seem to be fine, albeit the forced CamelCase should be replaced with a standard space. Other things of note: Kamikami's file is completely missing from the Wii version. MiniPigPoppo contains white and black colors, so they are the same enemy and could be merged; however, there is a separate file for SlumpBirdMiniBrown, so that could be split from the regular red version given the alternate behavior. There is also a separate file called KobuPakkunAngry for the more aggressive variant of KobuPakkun, which also has a separate guide entry, so that could also be grounds for split. Lastly, Gale Hawg is identified as the basic PigPoppo, so the base Hawg page can be deleted (just like hypothetical Puff, Goom, Stu, Piranha Bud, and Shadow articles). LinkTheLefty (talk) 19:50, 28 February 2018 (EST)

Why don't the individual levels have their own articles? Instead, the level details are given in the kingdom articles. Even if the kingdoms are just two levels and a boss, so are the worlds in Wario World, and those have separate articles just like the worlds and levels in any other game. Is there an actual reason for this, or is it just that no one bothered to split them off?

I'm currently watching a playthrough of this on YouTube, and have noted that it has many elements in common with the later Donkey Kong Country Returns. I also note that this game can easily be considered a Super Mario Sunshine analog to the DKC series, being "the odd one for the GameCube". As it stands, Donkey Kong 64 is considered to be part of the series while this isn't. Any official reasons? It actually have several elements in common with the current listing, especially in the remake. Doc von Schmeltwick (talk) 05:10, 10 November 2017 (EST)

Jungle Beat is not a DKC game as far as I know. I have the GameCube version and the only real connections it has with the Country games are that DK collects bananas, DK swings on vines occasionally, and that Dawn Savanna's music is a rendition of "DK Island Swing." Aside from Donkey Kong himself, no characters from the Country games appear in Jungle Beat at all. The Wii version apparently added a few DKC elements, such as the inclusion of Barrel Cannons and changing the story to be about stolen bananas. Maybe there is more stuff in the Wii version I'm unaware of, but I'm fairly sure Jungle Beat isn't a DKC game.

Many sound effects and gameplay elements from this game were later used for Returns. Anyways, it's a platformer revolving around collecting bananas, has similar Animal Buddies, similar themed enemies (note how most enemies in this game are pigs), and all in all, it seems mostly like a Donkey Kong Country game adapted for the unique control scheme (so the West could have some use for the Bongos, as Konga didn't sell well in this hemisphere.) Ever since Returns, the reasons to consider it not one have become tenuous at best, given that it lacked the Kremlings and took many elements from this game. Also note that we consider Donkey Kong 64 to be one, despite possibly having even less in common with the others. Doc von Schmeltwick (talk) 23:52, 15 November 2017 (EST)

Could you list those gameplay elements Returns borrows from Jungle Beat? It's been a while since I've played Returns, and anything specifically from the Wiimake I won't recognize. Returns may have ditched the Kremlings, but Diddy, Cranky, Rambi, and Squawks are still there, as are the balloon lives. Jungle Beat threw the entire cast out the window, using only original characters even in roles that existing characters could've filled (Squawks could've been used instead of the Helibird). As for DK64, it may not play much like a DKC game, but most of the cast (K. Rool, Kremlings, other Kongs) is there, and Wrinkly outright mentions DKC3.

I'm curious what you consider the game's many obvious and intended legs to DKC Returns, because I only see trace and superficial similarities. An handful of the enemies are based on the same animals while clearly looking and behaving differently (I don't know where you're going with the "note how most enemies in this game are pig" thing - the only other Donkey Kong game to feature pig enemies is the first Donkey Kong Land), sound effects, and the beating up the tiki instruments in Returns is vaguely similar to beating down bosses in in Jungle Beat.

Boiling down Jungle Beat to "a Donkey Kong Country game adapted for the unique control scheme" is just wrong and I have no idea how someone could watch a playthrough of the game and come away with the idea it plays similarly to any Donkey Kong Country titles. Completely different level design philosophy with mostly one-way levels where there's never any incentive to backtrack and where the focus is on nailing jumps the first time to maximize scoring. The clapping mechanic that's the basis for pretty much every interraction in the game (the hand slap move in DKC Returns is vaguely simialr in that it sometimes reveal hidden items, but it doesn't compare in versality or omnipresence). Walljumping is exclusive to Jungle Beat. The complete absense of Bonus Rooms or any standardised hidden collectable that must be found for 100% completion. The game's heavy focus on scoring points (infact, beside an obscure competition variant of the first DKC, none of the Donkey Kong Country games have anything that can be called a scoring system at all), etc. Like yeah, the Retro Studios Donkey Kong Country games have some differences from Rare's, but Jungle Beat is unrecognizable in every respect.

Furthermore, in an interview released near Jungle Beat's release, its co-director stated "All the characters outside of Donkey Kong and the banana are completely original. We don't really feel the past look of Donkey Kong was fresh enough for today. We really gave our new development team the chance to really create something unique and stylish.. While the question about the game's cast, it gives further weight to the idea Jungle Beat was developed as astand-alone game and not as a continuation of DKC. --Glowsquid (talk) 00:56, 16 November 2017 (EST)

The Wii version especially comes off as similar to Returns as the checkpoints are similar (animal waving a flag) and they have containers full of bananas activated via hand slap---aside from the similar sound effects and animations. Some sound effects from this game are outright reused in Returns, like the "defeated Shaoshao/armadillo I forgot the name of" noise being used for the "slot barrel appearing" noise. Look at some of the Wii gameplay: https://www.youtube.com/watch?v=VUaNzUvp4Ts . As for the "unique and stylish".....the original had that, but the remake changed a lot, including that, to deliberately come off as more DKC-like, as the Barrel Cannons can attest to. Doc von Schmeltwick (talk) 01:35, 16 November 2017 (EST)

Jungle Beat and Donkey Konga were both created to make use of the DK Bongos. Due to its rather unique control scheme, Jungle Beat is considered to be a spin-off of the main series. DK64 is considered to be a part of the main series, the decision of which I believe is Nintendo's to decide. DK64 also seems to take place after DKC3. The Kremlings appear in DK64, which ties it into the main series, and the name and gameplay of Donkey Kong Country Returns ties it in as well. Jungle Beat has none of that. Yes, the Wii version does share some similarities with Returns, which is totally possible as the devs of Returns could've looked back at Jungle Beat. Both use the Wii Remote and Nunchuk (optionally in Returns case, just the Wii Remote is an option), so it's likely they looked back to review how the controls worked, and brought in a few other things along the way. It also isn't uncommon for development teams to reuse sounds and other assets, heck, Super Mario Galaxy was created by the same team who did Jungle Beat and some sound effects are reused there.

Playing the game again for a few minutes, I'm noticing some similar, perhaps reused, clips from Donkey Kong, but does that matter? I'm also not finding any checkpoints, but perhaps I'm not playing the right levels (all are unlocked).

I have the Wii version. Sorry, didn't make that clear :P

In the Wii playthrough I watched, I saw them seemingly introduced (a pop-up description showed up) in some level that started with a row of crushing blocks with skull faces in the Apple Kingdom. https://www.youtube.com/watch?v=VUaNzUvp4Ts&t=139s Doc von Schmeltwick (talk) 13:41, 16 November 2017 (EST)

Okay, found the checkpoint. Apparently, they only show in some levels. Anyway, it's a Helper Monkey in a blue bush that just simply holds a DK flag. Other than being a checkpoint, there's nothing relating to the pig checkpoint in Returns.

And the pig isn't related in the slightest to the spinning star-painted barrel, but the flagging animals at least invoke each other. Doc von Schmeltwick (talk) 13:51, 16 November 2017 (EST)

On the same page as the Rolling Frog entry, and multiple other enemies, i've found a pineapple-like enemy on the scan. It's Japanese name is Buraddopain. Anyone can find in which level it is found and/or the internal filename is "englishized", or simply romanized? --