“These trees... They're slowly but surely...siphoning away all our...mushroom power... Our vim...”
—Toadiko, Mario & Luigi: Partners in Time 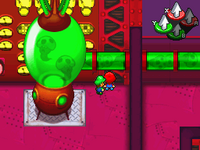 Vim as it appears in Mario & Luigi: Partners in Time

Vim is the life force of the Toad species. When extracted from Toads, Vim resembles a green liquid with transparent images of sad Toad spirits. The Toad whose vim is drained will lose their coloration and appear to slowly become part of the trees of Toadwood Forest.

Vim has only ever been referred to in Mario & Luigi: Partners in Time, where a species of alien fungi known as the Shroobs harvest the vim from the Toads to convert into fuel so they can power up their saucers.

The name of Vim is directly stemmed from the English word "Vim", an informal noun used to describe the energy or enthusiasm of an individual.

In Mario & Luigi: Partners in Time, the extraterrestrial Shroobs conquer the Mushroom Kingdom of the past and abduct many Toads so that their vim can be extracted and converted into fuel for their saucers.

Captured Toads are taken to the Toadwood Forest and are attached to special bio-engineered trees that suck the vim out of them. The vim then travels through the roots of the trees to the Vim Factory located in the middle of the forest. A giant tree sits in the middle of the factory, absorbing the vim and sending the solution through pipes that lead to the lair of Swiggler, a bio-mechanical robot Wiggler that has the ability to convert vim into fuel for flying saucers with special chemicals contained within its body. The saucers attach to Swiggler, who then transfers the fuel into the ships.

When Mario, Luigi, and the babies first visit Toadwood Forest, Toadiko is being drained of her vim and her voice is very weak. She tells them the story of what she, Princess Peach, and Toadbert experienced when they landed in the past with Professor E. Gadd's time machine. She manages to tell her tale before saucers begin shooting purple beams at the brothers, one hitting Toadiko and turning her into a purple mushroom.

Mario, Luigi, Baby Mario, and Baby Luigi put an end to the operation by destroying the Shroobs, the giant vim-sucking tree, and the Swiggler inside the Vim Factory.

In the battle with the Elder Princess Shroob, a saucer will occasionally bring her a drink of vim, restoring either 120 or 80 of her HP depending on the version of the game.