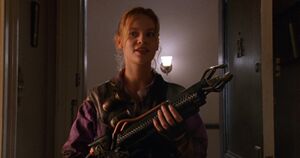 The fireball gun[1], also known as the Fry Guy Flamethrower,[2] the toaster,[3] flamethrower[4], flame thrower[5], fireball thrower[6], and flame-throwing gun[6], is a weapon used in the Super Mario Bros. film. As its name suggested, it shoots fireballs as opposed to bullets.

President Koopa threatens Mario and Luigi with a fireball gun during their battle, only to be launched into an empty vat by a Thwomp Stomper-using Mario. When the dimensions merge, the fireball gun malfunctions, forcing Koopa to discard it for a Devolution Gun. Upon returning to Dinohattan, Koopa manages to get the gun to work again and fires it at the Mario Bros., only to miss and hit a Koopa propaganda poster depicting him kissing a baby, enabling the brothers to get a clear shot at him with Devolution Guns.

Three weeks later, Daisy shows up at the Mario Bros.' home armed with a fireball gun, asking for help.