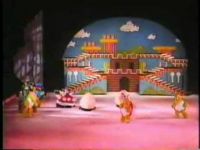 A scene from the show, showing the Koopa Army coming on stage

Mario Ice Capades is a television special and a show on ice that is loosely based on Super Mario Bros. It was seen on television on Thursday, December 7, 1989, on ABC.[1] The show begins with people playing Super Mario Bros., while Jason Bateman tells the plot of the game to Alyssa Milano, who has never played a video game before. Suddenly, the television screen starts to glitch, and Bowser (as King Koopa, his American cartoon counterpart, played by Christopher Hewett) appears on the screen. The rest of the show then takes place inside the game (where the background of the stage has props with pixelated clouds, coins, and castles).

Bowser, while riding a moving fort, explains that his plan is to use the NES to infect computers with viruses. He proceeds to call out his minions consisting of two green Koopa Troopas, two Goombas, one Hammer Brother, one red Koopa Paratroopa, and a Spiny. He then raps about his diabolical nature, riding his moving fort while the Koopa Troop dances around him.

Princess Toadstool calls Mario and Luigi, who descend out of the sky, so they can aid her. The princess helps the brothers by sneaking kids from the audience on carts while carrying plumber tools. One of the kids assists Luigi by giving him a flamethrower-like device. Bowser sends out all of his troops, only to be defeated by the weapon. Bowser then goes to fight the brothers and the children while riding on his fort; however, the children surround the Koopa King and attack him with the plumber tools. Bowser is then defeated, and the children are returned to the audience. Princess Toadstool then congratulates the brothers and gives them the "Purple Plunger for Bravery." The show returns to the real world, where Alyssa says that she has beaten the game. A commercial for the show aired on December 28, 1989, and was shown during an airing of an "Ice Capades" on channel 5 KSTP-TV, the ABC affiliate in the Twin Cities, Minnesota.[2]