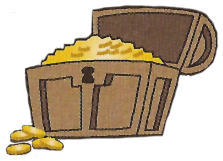 Artwork of a treasure chest from Wario Land 4 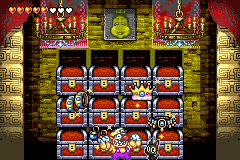 The treasure chest[1] is an object in Wario Land 4. There is a total of twelve treasure chests in the game. Three of them are found in each of the four main boss rooms, embedded into the wall in the background. They cannot be touched by Wario. During the boss battle, when time starts to run low (under 1:00 for four main bosses, 2:00 for the final boss), the treasure chests in the background will begin to disappear, one by one. Once Wario defeats the boss, the treasure chests that are left over are collected and stored in the Golden Pyramid, for the final boss against the Golden Diva. After the Diva is defeated, the total treasure chests Wario has (out of twelve) at the end of the game will determine how beautiful Princess Shokora will appear in the game's ending cutscene.

The following is a gallery of sprites showing all of Princess Shokora's forms and the number of treasure chests needed.