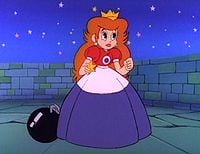 Super Princess is an alternate form of Princess Toadstool seen only in The Super Mario Bros. Super Show!, more specifically, in the episode "The Trojan Koopa". Unlike Super Mario, Super Luigi, and Super Toad, she does not shoot out fireballs or have the ability of flight.

In the episode, when the Koopa Packs have Mario and Luigi surrounded, Princess Toadstool gets a Starman and becomes Super Princess. The color of her dress changes to red, blue and white, and Super Princess becomes more powerful. She was able to defeat the Koopas single-handedly.

The Princess says "Princess P. to the rescue!", after getting the star, which is a nod to the name "Peach", which had only been the princess's name in Japan at the time prior to Yoshi's Safari introducing it to the Western market.