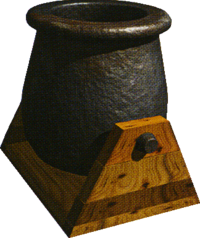 To activate a kannon, Diddy and Dixie Kong must throw a kannonball into it, and then enter it; it launches the Kongs to a Bonus Area. They first appear in Mainbrace Mayhem, and only appear in levels with kannonballs (not being shot). There is also a Kremling enemy named Kannon, whose name is based on the kannon it carries around.

A Kannon makes a brief appearance in the Super Nintendo Entertainment System version of Donkey Kong Country 3: Dixie Kong's Double Trouble. After the Kongs defeat Belcha, a Kannon pops up on top of Belcha's Barn and blasts the Kongs back to the start of Lake Orangatanga. It does not appear in the Game Boy Advance version as that version immediately returns the player back to the main overworld after defeating a boss.

A single kannon appears in Donkey Kong 64 in the Gloomy Galleon stage. To use it, Chunky Kong must put a kannonball into it. He must use the kannon to fire kannonballs at moving targets on the wall. By firing at enough of them, Chunky is awarded with a Golden Banana.