From the Super Mario Wiki, the Mario encyclopedia
(Redirected from Klepto (character))
Jump to navigationJump to search

This article is about the bird enemy. For the mission in Super Mario 64 DS, see Klepto the Condor. For the boss from Super Mario Land 2: 6 Golden Coins, see Big Bird.

“You didn't lose your hat, did you? If you did, you'll have to stomp on the condor to get it back.”
—Narration, Super Mario 64

Klepto, also known as Klepto the Condor[1] or Big Bird,[2] is a larcenous, heavy-lidded condor that first appears in Super Mario 64. Since then, Kleptos have continued to make infrequent appearances in the Mario franchise. Their name comes from "klepto-," a prefix originating from Ancient Greek and meaning "theft."

In Super Mario 64, Klepto is seen in Shifting Sand Land. It holds one of the Mushroom Castle's Power Stars, flying around between the course's four pillars, so Mario must reclaim it from its talons. Mario can attack the bird, knocking it out for a short period of time. Klepto eventually regains its senses, and after losing the Power Star, it attempts to steal Mario's cap. In later stages, Klepto can be found near the oasis and still attempts to steal his cap. If it does manage to steal it, it will fly around the pillars, carrying it similar to before. If Mario leaves and still has no cap, it remains in the course he lost it in.

Klepto has the same Power Star and purpose in Super Mario 64 DS. Another Klepto also appears in another level, Sunshine Isles. A third one makes an appearance on Tiny-Huge Island when the player character is big. Additionally, while Kleptos steal Mario's, Luigi's, and Wario's caps, they can damage Yoshi.

In Super Mario Odyssey, Klepto is encountered upon reaching the Lost Kingdom. It takes Cappy from Mario and retreats with him on a pedestal, made up of two platforms: one that is raised, and one that is lower. To get Cappy back, Mario must lure Klepto into sitting upon the lower platform, and then Ground Pound the higher one, making the platform Klepto is sitting upon shoot up and defeat it. Klepto appears again in a Moon Pipe sub-area in the same kingdom, and is defeated in the same manner.

Unlike Klepto in Super Mario 64, it here has two toes pointing forward and one pointing backward on each foot. It shares this trait with the Kleptos of Mario Pinball Land. Also, its design is somewhat different from previous games, with two tufts of hair, visible purple bags underneath its eyes, and a shady frown instead of a tired-looking expression.

In Mario Golf: Toadstool Tour multiple Kleptos can be seen flying on the Shifting Sands course. Klepto's name (erroneously spelled as Kelpto) can be seen sometimes on the scoreboard of a golf match.

Klepto also appears in Mario Golf: Advance Tour in the back of the Marion Club's training grounds, in which the player must rescue a Koopa Troopa hanging from its claws.

In Mario Pinball Land, a group of four Kleptos can be seen flying around the pyramid in the Shifting Sands world. If Mario defeats them, he gets a star.

In the background of Spiny Desert, three Kleptos can be seen on the upper left side of the board, playing tic-tac-toe.

A Klepto's model in Mario Party 4

Klepto also appears in Mario Party 4 on Shy Guy's Jungle Jam. Players can pay it five coins to be transported to the other side of the board, collecting coins in the process. In Paths of Peril, Klepto picks up players that fall off the stage. 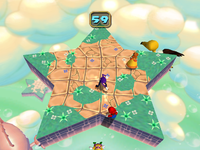 A Klepto in Fish Upon a Star

In Mario Party 5, Klepto has its own orb where, if landed on, it appears and takes the character to another character's space determined by a roulette. They also cameo in the minigame Fish Upon a Star. In the instruction guide, Klepto's name is erroneously spelled Clepto. 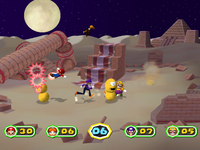 Klepto in the background of Pokey Punch-out

“Now, for-for-for... for you to solve it!”
—Klepto, Mario Party Advance

In Mario Party Advance, Klepto guards a treasure chest at Klepto Ruins. He is encountered alongside Mr. E, who entered the ruins in order to discover the treasure's ruins. Klepto is asked by Mr. E about the treasure's location, and flies up to reveal a treasure chest under his body. He then says that the treasure has a four-digit code, and that the code is his "favorite word." The code is the same word he stutters throughout the conversation, "for", and therefore 4444. If the code is entered incorrectly, Klepto berates the player and bluntly says that "for mean four." If the code is entered correctly, the chest opens to reveal a giant pile of shiny treasure, and Klepto congratulates the player. Klepto offers the treasure to Mr. E, but he refuses as it is not a mystery any more and quickly runs away. Klepto again praises the player for solving his riddle and gives them the Map Maker Gaddget as a reward. The ending reveals that Klepto changed the chest's code in order to better protect the treasure.

Klepto makes a few small appearances in Mario Party 7. Landing on one of the Green Spaces in Bowser's Enchanted Inferno! causes Klepto to grab the Star and move it to another location. Klepto can also be seen in cube form as the tops of totem poles on the Neon Heights board.

Klepto makes a minor cameo appearance in Mario Party 8, holding up the sign at the 5000 point mark for the minigame Test for the Best.

In Mario Tennis Aces, Kleptos can be seen in the background of Bask Ruins. Unlike in Super Mario Odyssey, these Kleptos use an updated version of their design from Super Mario 64 DS to Mario Party 8.