From the Super Mario Wiki, the Mario encyclopedia
< User:Nerdy Arianator
Jump to navigationJump to search

Support changes for both game and character pages

Support changes for only character pages

Support changes for only game pages

Additionally, there are a number of specialized classes of pages, most of which have (or will eventually have) corresponding navigation templates. They are as follows: 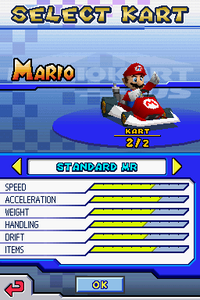 The kart selection screen in Mario Kart DS with Mario only.

In Mario Kart DS, there are 36 different karts in total.

The following ratings are from 0 to 10 in one-tenth intervals. The Items rating will be either 3.3, 6.7, or 10. For the three karts related to each character, each one will have one and just one of all three ratings, the standard kart always being 6.7.

The weight system used in Mario Kart DS is different from previous Mario Kart games. The weight class of the character is not as significant, as the weight does not create restrictions on the use of karts. However, the weight of a character can influence the weight of the kart. For example, Bowser driving on the Dry Bomber will have considerably more weight than Dry Bones on the same kart. For this reason, weight is omitted in the table below.

Secret Doors are a special type of sticker found in Paper Mario: Sticker Star. They are located exclusively at Outlook Point and sell for 80 coins. Their main purpose is to be Paperized onto silhouettes of doors found mainly on walls to see what is behind, usually several powerful stickers or a Thing. They can also be used in battle to successfully escape by having a door appear and have Mario walk through. However, in special occasions (such as when fighting Bowser), the door may collapse and fall on Mario, making him unable to escape.

A Secret Door is only found outside of Outlook Point twice; in Ice Flow after Mario reveals several Hidden Blocks, and in Bowser's Snow Fort after Mario defeats the two Shy Guys holding the Traveling Toad hostage.

*A secret door can be obtained here

There are a total of 17 playable characters, with four of them being unlockable 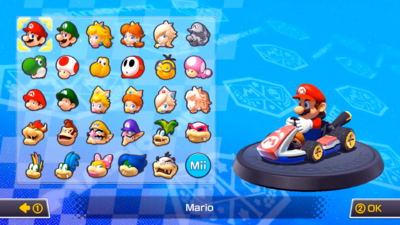 NOTE: This page was still under construction, so this is in no way similar to what the final page would look like.
{{delete|We don't cover this}} {{stub}} {{construction}}
The Electronic Entertainment Expo, or E3, is a week-long gaming convention that takes place in Los Angelos every year at the beginning of June. Gaming companies and developers unveil new hardware and software during the conference, as well as provide demos for upcoming games for the public to play. Nintendo has attended and hosted a press conference at the expo since 1995, but has stopped hosting press conferences since 2013, though they still attended.

History of Nintendo at E3

There was no hardware no Mario-related titles shown off.

Nintendo has announced that Mario Kart 8 will receive two add-on packs, which both include three additional characters, four karts, and eight courses in two cups.

Purchase of both packs will also include eight different colored Yoshis and Shy Guys. New courses include Wario's Gold Mine from Mario Kart Wii and courses inspired by F-Zero, Excitebike and Animal Crossing

This installment features a total of 49 playable characters, consisting of 34 veterans and 15 newcomers. 37 characters are available from the start of the game, whereas the other 12 must be unlocked by meeting certain conditions. Due to limitations with the Nintendo 3DS version of the game, certain characters from the previous installments in the series have been cut from the rosters of both versions in order to keep them consistent.[88] Unlike previous games in the series, with the removal of in-game transformations, Sheik, Zero Suit Samus, and Charizard are now standalone characters.

Note: Characters in italics are unlockable in the 3DS version. It is not confirmed if the same characters will be default and unlocked in the Wii U version.