From the Super Mario Wiki, the Mario encyclopedia
(Redirected from Flip Jump)
Jump to navigationJump to search

Zero Suit Samus is an alternate form of Samus Aran without her Power Suit. In this form, Samus's main weapon is the Paralyzer, a small pistol-like weapon that is only capable of stunning enemies. Although Samus has appeared without her armor in previous Metroid games in a small capacity, the first appearance of Samus in her recurring "Zero Suit" was in Metroid: Zero Mission, which consolidated Samus's appearance and abilities outside the Power Suit. While Zero Suit Samus appears in that game as a very vulnerable and more stealth-based form, the Super Smash Bros. series enhances her abilities by giving her an extensive, speedy hand-to-hand moveset similar to Sheik, with a strong focus on aerial combat, as well as additional weaponry in the form of a "Plasma Whip" mode for her Paralyzer and, in Super Smash Bros. for Nintendo 3DS / Wii U and Super Smash Bros. Ultimate, rocket-powered "Jet Boots" that resemble high-heeled stilettos. 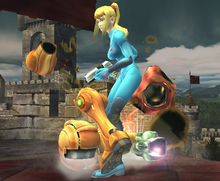 When Samus finishes her Final Smash, the Zero Laser, the force of the beam is so strong it causes the Power Suit to fall off, allowing Zero Suit Samus to be playable and enabling the use of the discarded pieces of her Power Suit as projectiles. Zero Suit Samus is more swift and agile than her armored form, though lighter and easier to KO. In this state, Samus fights using a gun that can stun opponents and also turn into an energy whip. Zero Suit Samus's standard special move is the Paralyzer, in which she fires a blast from the gun that can stun opponents. Her side special is Plasma Whip, in which she fires a whip to the side that deals more damage at the tip. Her up special is Plasma Wire, in which she fires the whip directly up. Finally, her down special is Flip Jump, in which she does a jump that can be followed up with a kick. Similar to Samus, Zero Suit Samus's grab also uses the Paralyzer's whip, which gives her an extended grab; this and her up and side specials can all be used as tether recoveries. 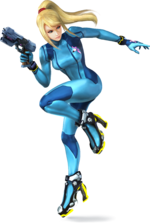 Zero Suit Samus receives significant improvements: her mobility and combo ability have been improved and her tilt attacks and forward smash deal more damage. However, her overall damage output is lowered, many of her attacks have smaller hitboxes, some of her moves have increased lag, and she no longer has access to her Power Suit pieces.

Zero Suit Samus benefits from universal changes: her mobility is even faster, her short hop timing is reduced, the landing lag in her aerials are reduced, the reintroduction of directional air dodging aids her recovery, and the ability to use any ground attack out of a run and her aerials on ladders come with merits. However, her combo potential has been reduced, with her down throw in particular having increased ending lag, while her down smash keeps opponents paralyzed for a shorter time. 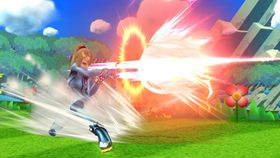 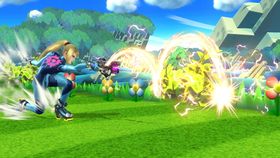 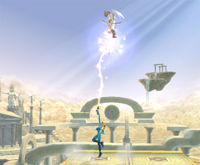 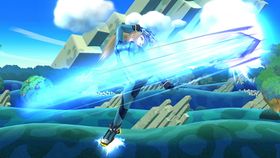 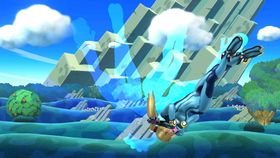 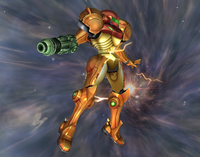 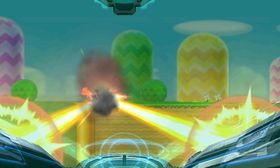