“With Floaty Fluff, you can ride the wind, boiyoing! Just shake the Wii Remote when you feel it rumble to really fly!”
—Star Bunny, Super Mario Galaxy

Floaty Fluff is a type of plant that resembles a giant windborne dandelion seed. By grabbing on to one, Mario can hitch a ride with help from the wind. 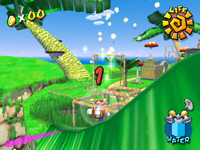 Several fluffs in the distance in Super Mario Sunshine

Floaty Fluff debuts in the Pianta Village's mission Fluff Festival Coin Hunt in Super Mario Sunshine. There are fluffs blown all around the village by gusts of wind, and Mario must grab one and use it to glide from the top of the giant palm tree in the center of the village to a nearby cloud to retrieve the mission's Shine Sprite. They move back and forth between the two areas with quick but regular movements.

In Super Mario Galaxy, Floaty Fluff starts out on the ground, appearing as a large fluffy pink dandelion usually found in clusters of three or more. Performing a spin near a cluster of Floaty Fluff causes them to rise out of the ground into the air. Mario or Luigi can then jump to grab on to a piece, after which he can travel safely over large gaps by gliding on gusty winds. While he glides with Floaty Fluff, shaking

causes it to ascend slightly higher. This can be done only thrice each time Mario or Luigi grabs on to a new piece of Floaty Fluff. Floaty Fluff appears only in the Gusty Garden Galaxy, where it is used throughout most of the missions in the galaxy.

In Super Mario Galaxy 2, Floaty Fluff appears in Honeyhop Galaxy and Bowser's Galaxy Generator, and it is again used to cross large gaps that cannot be traversed otherwise. It functions the same way as in the predecessor.