This article is about the item. For the enemy, see Shoe Goomba.

“I heard a rumor that you can walk on top of Munchers if you put on Shoe Goomba's Shoe!”
—Ruler of the Skies, Super Mario Maker 2

A Goomba's Shoe, also known as the Shoe, is a large, green-colored boot with a wind-up key sticking out of the back of it. It is worn by a Shoe Goomba. It is one of the most uncommon of all the power-ups in the entire Mario franchise, and made its first game appearance in Super Mario Bros. 3.

The Goomba's Shoe was originally known in the PRG0 English NES release as Kuribo's Shoe (also formatted as Kuribo's shoe[1]), with "Kuribo" being the Japanese name of Goomba left unchanged. The name was correctly translated as Goomba's shoe in the PRG1 English NES localization. The name is localized in the re-releases of Super Mario Bros. 3 and the Game Boy Advance remake, but the item has been called Kuribo's Shoe again in Super Mario All-Stars, due to it being derived from the PRG0 localization.[2] 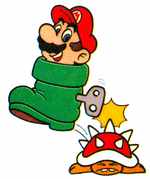 Mario jumping on a Spiny with the Goomba's Shoe.

The first appearance of the Goomba's Shoe is in Super Mario Bros. 3, where they appear solely in World 5-3. The Kuribo's Goombas of this level hop around aimlessly in Goomba's Shoes. If jumped on by Mario, they are defeated without leaving their shoe behind; however, if Mario attacks one of these Goombas from below, the Goomba is knocked from the shoe, allowing Mario to hop into the shoe and ride in it himself. In Super Mario Advance 4: Super Mario Bros. 3, there is an e-Reader level called "It's a Shoe-In" that uses the Goomba's Shoe. In that level, it can also appear from ? Blocks like a normal power-up. 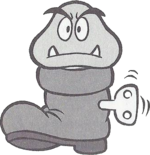 A Kuribo's Goomba from the Perfect Edition of the Great Mario Character Encyclopedia.

Once wearing a Goomba's Shoe, Mario is able to easily hop across spikes and sharp-toothed or spiky enemies, such as Munchers and Spinies. Once the end of the level is reached, though, Mario loses the Goomba's Shoe. In the original Japanese version, a hit also causes Mario to shrink to Small Mario in addition to losing the shoe. However, if the player is already small, Mario only loses the shoe, as in the international versions of the games.

In several of the unused levels of Super Mario Bros. 3, Goomba's Shoes can be found and used. A Goomba's Shoe can also defeat other enemies that do not appear in World 5-3, such as Podoboos, Roto-Discs, Chain Chomps, and Lava Lotuses, as well as Firesnakes if positioned correctly.[3]

The Goomba's Shoe is one of the few power-ups not mentioned in any of the instruction booklets for the original game, its remakes, or the Virtual Console Operations Guide.

While the Goomba's Shoe itself is not seen in Super Mario 3D World and its Nintendo Switch port Super Mario 3D World + Bowser's Fury, a similar power-up called the Ice Skate that can be used to skate on frozen lakes is present. Both playable characters and Goombas can ride them. These shoes change color depending on which character is riding them.

A giant version of the Shoe can be used by placing a Super Mushroom over a Shoe Goomba. Big Shoes can Ground Pound by pressing down on the

Control Pad while in midair. This attack can defeat normally indestructible enemies such as Munchers, Bill Blasters and Boos, as well as stun other players in multiplayer modes. Upon impact, two chomping clouds appear on either side of the Goomba's Shoe and briefly move to the left and right before disappearing. The clouds can defeat any enemies that they touch. A similar chomping cloud effect can be seen in files for the unreleased game Super Donkey, which precedes the first Super Mario Maker by about 18 or 19 years.

A stiletto variant of the Shoe also appears, which is black in the Super Mario Bros. style, and red in the Super Mario Bros. 3 style. Unlike the Shoe, the Stiletto makes a distinct tapping noise as it hits the ground. While the default sized Stiletto variant functions identically to the normal Shoe, a giant Stiletto can use its Ground Pound to destroy blocks and defeat more resilient enemies such as Thwomps, as well as other normally indestructible enemies, such as Cannons and Bill Blasters.

Adding wings to a Shoe allows the player to flutter into the air while wearing one by holding the jump button, gaining extra distance akin to Yoshi's Flutter Jump. The winged Stiletto makes a noise reminiscent of a high-pitched feminine laugh when hovering.

In Super Mario Bros.: Peach-hime Kyūshutsu Dai Sakusen!, the two recurring Goombas are briefly seen hiding in a giant shoe of somewhat similar design to a Goomba's Shoe; however, as the film's release precedes Super Mario Bros. 3 by over two years, the shoe's design is likely a coincidence.

In volume 3 of Super Mario-kun, Mario steals a shoe from a powered-up Rex and wears it as a Goomba's Shoe. The bad smell from the Rex's feet sickens Mario, however, and the enraged Rex pummels him.

Super Koopa in a Karoobi from The Adventures of Super Mario Bros. 3.

In the opening sequence of The Adventures of Super Mario Bros. 3, Mario uses a Goomba's Shoe to stomp away Cheatsy Koopa and Kooky von Koopa. Their only episode appearance is in "Super Koopa". During the episode, they are referred to as Karoobis, a mispronunciation of Kuribo.

In Mario & Luigi: Bowser's Inside Story, the enemy Sockop is very similar to a Goomba's Shoe, especially when Luigi is walking around in it. One Sockop is even named Kuribo, as a reference to the original localized name of the Goomba's Shoe.

While no actual Goomba's Shoes appear in Super Paper Mario, one Sammer Guy is called the Shoe of Kuribo, a reference to the Goomba's Shoe's original name.

While the Goomba's Shoe does not appear in Paper Mario: Sticker Star, there are two sets of stickers that are similar to it.

The Super Boot and Shiny Super Boot stickers have a similar appearance to the Goomba's Shoe, but lack the wind-up key on the back. They can be bought at Outlook Point, and when using them, they stick to Mario, making him look as if he is wearing the boot. By pressing

, Mario can dodge most attacks with the boot. The boot also allows Mario to stomp spiked enemies, and also increases the power of other Jump attacks used when the boot is in effect.

The Flashy Clone Jump, Big Shiny Clone Jump and Megaflash Clone Jump resemble more closely the Goomba's Shoe and they retain the wind-up key on the back, but provide a very different function. While using a Clone Jump, Mario is cloned until being four of them. Each of the four Marios will attack in succession, jumping on an enemy one after another. Each Clone Jump sticker has the possibility of Crumpling the attacked enemy.

The Boot Car in Paper Mario: The Origami King is a vehicle that resembles a Goomba's Shoe. Mario can ride it in the Scorching Sandpaper Desert. There is also a Shoe Goomba Folded Soldier that can be fought in the Breezy Tunnel.

The Goomba's Shoe was considered to reappear in Super Mario Galaxy and later Super Mario 3D Land, but this idea was scrapped as the developers were unsure of how to use it in new gameplay experiences.[4]