From the Super Mario Wiki, the Mario encyclopedia
(Redirected from Piro Dangle)
Jump to navigationJump to search

This article is about the enemies debuting in Donkey Kong Jr.. For other uses of the word Spark, see Spark (disambiguation).

Sparks are orb-shaped creatures who continually emit pulses and flashes of electricity. They are mostly found crawling around walls and ceilings and moving across wires. Sparks are the first in a series of enemies in the Mario franchise that are balls of electricity, including Lil Sparkies and Amps.

Sparks first appear in Mario's Hideout of Donkey Kong Jr. Red Sparks (also known as Globes[1]) continue to circle their own platform, but blue ones can travel to other platforms through static particles. These Sparks are generated by Mario in order to shock Donkey Kong Jr., preventing him from saving his father.

In the Coleco Adam port, the layout of the stage has been altered and there are no blue Sparks. Instead, they have been replaced by dangerous green water drops that come from the mouths of spigots and cracks in the ceiling.

In Donkey Kong for Game Boy, only one Spark[2] appears in Stage 6-4, rotating clockwise at a medium pace around a small platform in the path of a Conveyor Belt. It has the same behavior as the Sniper and Sukōpī seen earlier in the game, except losing a life from the Spark displays an electrocution animation. Unlike other appearances, the Spark in this game lacks eyes. This game also introduces a more common wire-crossing successor.

Sparks also appear in Super Mario Bros. 2 as uncommon enemies, usually encountered underground or in buildings. They circle platforms, though some can hover in the air if a Mushroom Block is pulled out from beneath them. Sparks can be defeated by throwing an object at them or using a POW Block near them. Sparks can't be jumped on and can hurt the player's character by simply touching them. In the NES version, Sparks have red outlines around their eyes; in the SNES version and other subsequent remakes, they have yellow outlines as well as an orange outer body outline. If the screen scrolls while they are in a specific position, they automatically die.[3]

Sparks changed slightly in Super Mario Advance. If the player is hit by one, they are knocked back and the screen flashes. In addition, an item called the Spark Chaser can be used to expel them from new jar interiors.

“Spark on the warpath!”
—Mario, "On Her Majesty's Sewer Service" 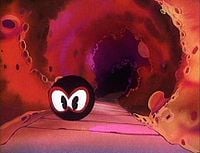 A Spark from The Super Mario Bros. Super Show!

A Spark makes only one appearance on The Super Mario Bros. Super Show!, in the episode "On Her Majesty's Sewer Service". Having been dumped into the Tunnel of Doom, Mario and Luigi, while running from a Goomba, encounter a Spark that is quickly approaching. Mario and Luigi manage to avoid this Spark and the Goomba by creating a grappling hook out of a super spy hose nozzle and mini plunger; apparently unable to stop moving, the Spark and Goomba subsequently crash into one another, causing an explosion. In this appearance, the Spark featured does not appear to radiate any electricity. 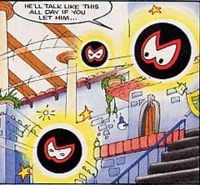 Three Sparks from "Bedtime for Drain-Head"

Sparks are featured quite prominently in issues of Nintendo Comics System, appearing in such stories as "The Legend," "Bedtime for Drain-Head," and "A Mouser in the Houser." Like most enemies featured in the stories, they are shown to be intelligent and fully capable of speech. 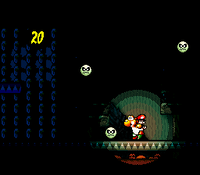 In Super Mario World 2: Yoshi's Island and its Game Boy Advance reissue, Sparks are known as Piro Dangles.[4] They emit fire instead of electricity and have faces similar to that of Fryguy. Occasionally, their fire temporarily goes out, revealing that underneath they are white spheres. During this time, they are harmless. In Super Mario World 2: Yoshi's Island, Piro Dangles can only be found in a secret room in Burt The Bashful's Fort. There is also an unused variant of Boo Blah that has a Piro Dangle on its head. In Yoshi's Island: Super Mario Advance 3, they also appear in Endless World of Yoshis and can now be defeated with a blue watermelon.

In Yoshi's New Island, they are found in Beware the Boo Brigade and Fort Key Calamity. Both instances have them appear in a dark room.

The Legend of Zelda series[edit]

Wire Trap
Tribe: Weapon clan
Disposition: Straight line
Game appearances: Jr., GB Donkey
A lump of electricity that emits sparks
In JR, they are running around on the floor, so you have to run past them at once when you see a chance; in GB, they are moving over the ropes, so avoid them at all costs. In both cases, you will be electrocuted if you touch them.

Spark
Tribe: Weapon clan
Disposition: Reluctant to give up
Game appearances: USA
American-born Spark
Like Spark, it is a mass of electricity and runs around blocks. Jump to avoid them as you go. If you have a key or Mushroom Block, you can hit it with them to defeat it.

Bio: 電気を発しながら、足場の周囲を高速で回転している。[12] (It spins around the platforms at high speed while emitting electricity.)

Spark coverage on other NIWA wikis: