From the Super Mario Wiki, the Mario encyclopedia
(Redirected from Peanut Popgun)
Jump to navigationJump to search 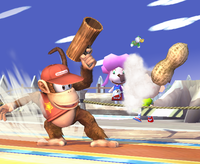 “Each partner has their own ranged attack. Depending on the enemy, these attacks may have different effects. Dixie Kong and Cranky Kong can only use their ranged attacks while on Donkey Kong's back or in midair.”
—Donkey Kong Country: Tropical Freeze manual

The popgun is a pistol weapon used by the Kongs in the Donkey Kong franchise. They are small, ranged weapons which shoot various types of projectiles. Since Donkey Kong 64, a pair of popguns have been Diddy Kong's signature weapon, more specifically the Peanut Popguns, which shoot out peanuts. The Peanut Popguns are two wooden pistols which appear to be hollowed out logs.

“With his pistols out, he's one tough Kong!”
—DK Rap

When Diddy is using the Rocketbarrel Boost move, he is always holding out his Peanut Popguns. When Diddy is on land, the player must simultaneously press

for him to take out the Peanut Popguns, or another time for Diddy to put them away.

Starting with Fungi Forest, the Kongs can go to Funky's Store to buy an upgrade for five Banana Bunch Coins that enables every Kong's personal weapon, including the Peanut Popguns, to use homing ammo that they pick up from red Supply Crates.

The Peanut Popguns make their Donkey Kong Country series debut in Donkey Kong Country Returns and its Nintendo 3DS port, Donkey Kong Country Returns 3D. They have a stubbier appearance and are each held together by two iron rings. Diddy can use them by default, although they are less effective than in Donkey Kong 64 and can only be used in 2-player mode, where Diddy is independently controlled by the second player. With the Peanut Popguns, Diddy can perform the Popgun Pound ability, where he shoots peanuts while ground pounding. Alternatively, Diddy can shoot peanuts if the second player shakes the Wii Remote while Diddy is in mid-air or if he is on Donkey Kong. Launched peanuts bounce on the ground quickly and break upon hitting a wall or an enemy; while Diddy can kill a select few enemies by shooting peanuts at them, most will only be temporarily stunned by this, causing them to become dizzy or confused.

Although bosses and certain enemies such as Tikis are not affected by the Peanut Popguns's projectiles, a couple of exceptions are found in the respective boss fights for Mugly and Thugly: when the boss opens its mouth, Diddy can optionally shoot peanuts into it. By shooting enough peanuts, the boss temporarily stops to chew on the peanuts, and its vulnerable spot is exposed. This is indicated by hearts surrounding their head. After taking a hit, the boss stops being distracted and continues with trying to attack Donkey Kong and Diddy Kong.

Concept artwork of the Gumball Popgun

The Peanut Popgun returns as Diddy Kong's weapon in Donkey Kong Country: Tropical Freeze and its Nintendo Switch port, appearing alongside the Gumball Popgun[1] and the Denture Popgun,[1] used by Dixie Kong and Cranky Kong respectively. The new popguns have the same usage as the Peanut Popguns, and can all be used as in Donkey Kong Country Returns. However, they have all been nerfed from the previous game, as now there are no enemies that can be outright killed by their ammo, and stunned enemies will recover more quickly.

The player can use popguns whenever Diddy, Dixie, or Cranky are controlled independently, which is possible in multiplayer sessions and in Hard Mode. In order to shoot the weapon, the players that control these characters have to press the ground pound button while in mid-air or mounted on Donkey Kong. Like the previous game, Diddy can feed some bosses by shooting peanuts into their mouth.

Dixie Kong's popgun shoots bubblegum instead of peanuts, which is a reference to Dixie's idle animation in Donkey Kong Country 2: Diddy's Kong Quest and Donkey Kong Country 3: Dixie Kong's Double Trouble!, where she would blow bubblegum. Cranky Kong shoots chattering dentures, alluding to his old age, although his alleged popgun is never shown and instead he appears to fire his dentures with his cane.

The Peanut Popgun in Super Smash Bros. for Wii U

Diddy Kong's standard special move in Super Smash Bros. Brawl, Super Smash Bros. for Nintendo 3DS / Wii U and Super Smash Bros. Ultimate involves using a Peanut Popgun, and can be charged up. The popguns are fully charged when Diddy reaches up and grabs his hat. When charged up, the peanuts fired are much faster, and will have a better chance at hitting the opponents. If Diddy charges it for too long, the popgun explodes in his hands, briefly stunning him but otherwise not dealing any damage. Diddy Kong uses his Peanut Popguns during his Final Smash, the Rocketbarrel Barrage.

In Super Smash Bros. Brawl's The Subspace Emissary, Diddy uses the Peanut Popguns in two cutscenes to attack enemies. In one cutscene, when Donkey Kong and fight off the Koopa Troop, Diddy blasts the Bullet Bills with peanuts, posing with Donkey Kong as one of the defeated Bullet Bills explodes behind them. In a later cutscene, when Diddy is dropped out of the Arwing, he propels himself up to the Smash Skiff, blasting the Primids with peanuts.

In Dr. Mario World, Diddy Kong uses a Peanut Popgun for his special ability, which splits each capsule in two and allows for each part to be placed individually. To indicate the splitting, a peanut breaks in half when the ability is activated.

In Super Smash Bros. Brawl, the trophy for the Popgun erroneously states that they can fire two peanuts at a time.

The placeholder that became the Peanut Popguns in Donkey Kong 64.