“I'm Shadow. Shadow the Hedgehog. ...What? I look like Sonic? You have to be joking. Don't you ever put me in the same boat as that inferior half-wit!”
—Shadow, Mario & Sonic at the Rio 2016 Olympic Games

Shadow the Hedgehog is a prominent anti-hero and the rival of Sonic the Hedgehog in the Sonic the Hedgehog franchise. He was created to be the "ultimate life form" by Dr. Eggman's grandfather, Professor Gerald Robotnik. Shadow does whatever is necessary to achieve his goals, and because of this he has fought both alongside and against Sonic the Hedgehog; Shadow and Sonic have somewhat of a frenemy relationship and rivalry. Shadow often fights alongside E-123 Omega and Rouge the Bat, who became his closest friends and allies. While Shadow typically shares most of Sonic's abilities, Shadow primarily uses a variety of chaos energy to battle enemies, most notably Chaos Control, a power that allows him to distort time and space. Shadow the Hedgehog crosses over with the Mario franchise in the Mario & Sonic and Super Smash Bros. series of games.

He was voiced by Jason Griffith, along with Sonic the Hedgehog and Jet the Hawk, in his first three Mario crossover appearances, and is currently voiced by Kirk Thornton since Mario & Sonic at the London 2012 Olympic Games.

Shadow and Luigi competing in the 110m Hurdles event

Shadow is a playable character on Sonic's team in Mario & Sonic at the Olympic Games. His character type is Speed, equalling him with Sonic, but he has higher stats than Sonic in other events. In Dream Fencing, his special move is transforming into Super Shadow and charge forward with multiple stabs of his epée. In Dream Table Tennis for his Special Shot, he jumps up, twirls vertically, lands, inhales and then fires the ball super fast at the opponent. Shadow has the lowest level stamina among all the characters.

Shadow also appeared in the sequel, Mario & Sonic at the Olympic Winter Games. He appeared as a speed character, like in the predecessor. However, unlike with the previous game, Shadow is slightly slower than Sonic, but he has the strongest acceleration abilities in the game. 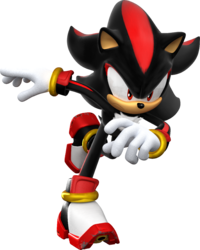 Shadow returns as a Speed type playable character in the Wii version of Mario & Sonic at the London 2012 Olympic Games, where he appears in the opening with all of the other athletes as well as later competing in Football and Track Cycling - Team Pursuit. A Mii outfit based on Shadow also appears in the game, and Shadow appears as a character in London Party that can be spoken to in order to play certain minigames and earn stickers.

In the Nintendo 3DS version, Shadow is included in the Challengers group, meaning that he is only playable in certain Events. In the Story Mode, Shadow first appears asking Sonic, Tails and Yoshi to share the information they know about the Phantasmal Fog and Fog Imposters after he had defeated some with Silver, and later helps the group chase down Jet, eventually being the one who challenges him to an event. With Jet's help, the group find the Fog machine, and after defeating Bowser Jr., shadow destroys it, clearing the fog from the area. Shadow also appears to offer support to Mario, Luigi, Sonic and Tails when they confront Bowser and Dr. Eggman, later appearing at the opening ceremony. Shadow also appears in the Challengers Bonus episodes, as Bowser Jr. heads to London to find him when he hears that he and Silver are defeating Dr. Eggman's robots, and accepts Shadow and Silver's challenge when he arrives and manages to take care of the robots himself. After they are defeated, Shadow and Silver pretend to be upset, but later wish Bowser Jr. good luck for the games before heading off. A badge of Shadow can also be obtained from the badge machine.

Shadow is playable again in the fourth game of the Mario & Sonic series: Mario & Sonic at the Sochi 2014 Olympic Winter Games. Like previous games in the series, he is classified as a Speed type.

Shadow is a default playable character in Mario & Sonic at the Rio 2016 Olympic Games. In the Nintendo 3DS version, he is only available to play with in the Football and 100m events. He is available in all events in the Wii U version. If the player's Mii avatar interacts with Shadow, the latter will get irritated at the avatar mixing him up with Sonic and demand he not put him on the same boat as him, referring to Sonic as an "inferior half-wit."

In Super Smash Bros. for Nintendo 3DS / Wii U and Ultimate, like several other characters, Shadow is voiced by a different voice actor in different languages (e.g. he has his French voice in the French version).

Like Sonic the Hedgehog, Shadow is an extremely fast hedgehog that can give his more famous blue rival a run for his money in most Speed events. Additionally, his accuracy will help give him a leg up in the events like the archery and fencing.

Shadow the Hedgehog, in his black fur and red stripes, returns to test his skills in the Olympic Winter Games. With the ability to harness the power of the Chaos Emerald, Shadow can perform Chaos Boost on the Wii and DS, and Chaos Control on the DS.

Shadow the Hedgehog coverage on other NIWA wikis: