From the Super Mario Wiki, the Mario encyclopedia
(Redirected from Speed Golf)
Jump to navigationJump to search

Mario Golf (マリオゴルフ Mario Gorufu) is a sports video game series developed by Camelot Software Planning and published by Nintendo. The series brought the Mario universe to golf, even though Mario himself had appeared in multiple golf games on older systems. Mario Golf, the first Camelot game to use the Mario branding and to be developed for a Nintendo system, debuted on the Nintendo 64 in 1999 and was ported to Game Boy Color. Releases followed of one game for both the Nintendo GameCube and the Game Boy Advance, while the fifth installment was released for Nintendo 3DS in 2014, and a sixth installment released for the Nintendo Switch in 2021. Some games in the series feature role-playing game elements.

The N64 and Game Boy Color versions can communicate with each other via Transfer Pak connectivity, and the GameCube and GBA versions can do the same via the Game Link Cable; the connectivity features allow players to upload characters and data from one game into the other. 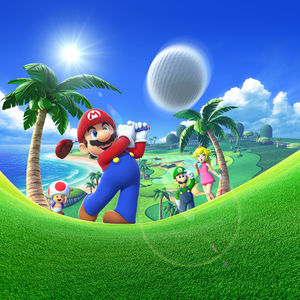 Mario hits a golf ball with other characters looking on.

Mario Golf games are typical golf games, where the player's objective is to hit the ball into the hole using as few strokes as possible. The games in the series specifically have simplified "pick-up-and-play" type gameplay, which does away with many of the complicated real-life aspects of golf as found in other games relating to the sport. However, despite the simplicity of the games' appearance and play style, they run on very deep game engines. Before each swing, the player chooses a club, a general direction, and a range for the ball to travel. During the swing, the player determines power by timing a button press for a marker to stop at the desired point on a power meter; at this point, the player can choose to influence the direction of the ball by applying spin. Players can alternate between auto and manual shots, with the latter providing the player with more control, albeit at a higher risk of a poor shot. Many of these gameplay aspects, such as spin, are affected by characters' individual statistics. These relate to features such as control of the ball and the general height of shots, which determines how much the character's play is affected by environmental factors like wind, rain, and relief of the land. The first- and second-generation Mario Golf home console games also have characters use recorded voice samples to comment on their opponents' shots.

Mario Golf games contain several gameplay modes and variants of golf, including the traditional stroke and match play, speed golf, ring shot, mini golf, and skins match. The main mode is "Tournament Mode", where the player competes against artificial intelligence (AI) opponents on a series of courses to win trophies. With the progression of the series, new modes were introduced, such as "Character Match", where characters battle computer-designated AI opponents to be upgraded into "star characters" and gain statistical enhancements; "Coin Attack", where players can collect coins scattered around courses; and "Ring Attack", where players are required to direct the ball through rings of varying locations, angles, and diameter while keeping on or under par.

The courses in Mario Golf games are based on traditional locations within the Mario franchise, such as the grounds of Peach's Castle in the Mushroom Kingdom. As the series progressed, more complex terrain and exotic features were introduced into courses, and courses were designed that resemble real-life golf courses. More advanced courses offer a higher frequency of difficult terrain and elevation, as in bunkers, which limit the accuracy and range of shots. There are also hazards themed after the Mario universe: these include lava pits, Thwomps, Chain Chomps, etc., which will incur one-shot penalties if landed on, as will water sections and out-of-bounds areas; and Warp Pipes, which can change the location of the ball.

The handheld Mario Golf games are styled after role-playing games. They feature an overworld map, where the player can walk around and interact with different courses, characters, and objects. There are golfing clubs which hold tournaments. The player controls a golf player (either male or female) and aims to win the aforementioned tournaments. There are also side courses where the player can train or earn special clubs. Each of the courses has two places of interest: the main golf course and the practice area. The main course is accessed by entering tourneys or playing practice rounds, and the practice area allows players to test their skill with minigames.

In the first handheld Mario Golf and Advance Tour, the golfing clubs are named Marion, Palms, Dunes, and Links. The player-character achieves the goal of becoming the "ultimate golfer" by winning the tournaments in the aforementioned clubs, defeating their champions in match games, and earning the right to engage in a one-on-one match against Mario, who in the context of these games is the world's ultimate golfing champion. In addition to its main course and practice area, Marion features a third place of interest: the clubhouse, which is where the player-characters are based and can talk to other golfers. By progressing through the game and completing its various elements, the player can gain experience to distribute among the two characters to enhance both their drive as well as their hitting capabilities. As a character levels up in those games, they gain stat points to improve their abilities.

The first and second generations of Mario Golf consisted of one home console title and one handheld title; each pair of titles had content transferable from one game to the other. Using the Nintendo 64's Transfer Pak, players were able to upload characters and data found in the Game Boy Color version to the Nintendo 64 version, meaning that the players exclusive to the Game Boy game could be seen and played as in full 3D. Data from the Nintendo 64 version was also saved onto the Game Boy Color cartridge. Transfer Pak functionality is not included in the Virtual Console release. The connectivity functions returned when players were able to use the Nintendo GameCube - Game Boy Advance Cable to transfer characters between Toadstool Tour and Advance Tour. These functions are absent from later entries of the series, as these games do not have a respective counterpart.

It has been requested that this section be rewritten and expanded to include more information. Reason: include more game modes

Wario beginning a round of Speed Golf in Mario Golf for Nintendo 64.

Speed Golf is a recurring game mode that has appeared in nearly every main installment of the Mario Golf series. The game mode's rules throughout the series are to complete a course (or a three-, six-, or nine-hole section of it) as fast as possible, and the player is timed through each hole on how long the player has spent on each one. It can usually be played against a CPU or alone, and any course can be chosen. In Mario Golf: Super Rush, players must run to the balls in order to hit them until they enter the hole.