From the Super Mario Wiki, the Mario encyclopedia
(Redirected from Waluigi Pinball (course))
Jump to navigationJump to search

This article is about the course from Mario Kart DS. For the court in Mario Sports Mix with the same name, see Waluigi Pinball (court).

Waluigi Pinball is the third race course of the Flower Cup in Mario Kart DS. As its name implies, this course takes place in a giant pinball machine themed after Waluigi and contains many sharp turns and curves.

Soon after the countdown ends and the race begins, the kart drivers are launched into the pinball machine. After that, the racers start a descent down the machine, encountering numerous pinballs on the way. Colliding with one of these causes drivers to be knocked backwards. Additionally, a racer loses any items they may be carrying. While the racers are in the pinball launcher, they are immune to all items, including Lightning. Later on the track, inside the pinball table, there are flippers and bumpers. Bumpers push and speed up drivers, but flippers, when moving, can cause them to get electrocuted and spin out. This is the longest Nitro course in the game.

When the player crosses the finish line, starting another lap, Lakitu is shown on the right side of the player, holding the lap count signs.

This course shares its Grand Prix introduction fanfare with Figure-8 Circuit, Mario Circuit and GCN Luigi Circuit. It is the only non-circuit course with this distinction.

The course has several unique sound effects that evoke pinball machine scoring noises. Most of these sounds are retained in its retro course appearances in future games:

Waluigi Pinball returns as a classic course in Mario Kart 7 as the fourth and final course of the Banana Cup, despite Waluigi not being playable in the game. The layout remained the same, but with enhanced graphics and the Dash Panels recolored to orange. The starting banner now displays the classic Mario Kart logo.

The launch after the starting line now encompasses a Glide Ramp, although like Wii Maple Treeway and DS Airship Fortress, players cannot aim their flight. Players are also no longer immune to items while in the launcher, and being hit by anything (or stowing their glider) results in having to be rescued by Lakitu. Additionally, the glider section is now shown on the minimap. The jumps after turn 1 and after turn 6 can be used to perform a trick and gain a boost. An extra Dash Panel is added in the small drop near the circular turn that comes after the 2nd jump.

The pinballs, bumpers, and flippers on the table behave the same way as in the DS version of the course, with the exception of the bumpers in the center of the lower part of the table rotating clockwise instead of counterclockwise. While playing local or online multiplayer, only one pinball traverses the main table as opposed to two.

Like in Mario Kart DS, when the player crosses the finish line to start another lap, Lakitu is shown on the right side of the player, holding the lap count signs.

The staff ghost for this track is Wario. 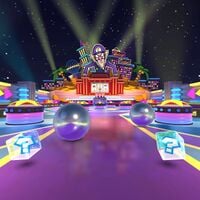 Waluigi Pinball returns in Mario Kart Tour beginning in the 2019 Halloween Tour, alongside SNES Ghost Valley 1 and DS Luigi's Mansion. It featured a major visual upgrade. The image of Waluigi is now illustrated 2D, and his head now rotates from left to right and is surrounded by several brightly-lit buildings and large stacks of coins, the slots below them now have a Las Vegas theme to them, the bumpers have a brighter color, the Mario Kart logo is a flashing yellow light and uses a modern design, and there is a new sign after the pinball launcher with Waluigi's art from Mario Party: Star Rush, the track name, a metal ball, two flippers, and scrolling text below that reads "Waluigi No. 1". The rotating bumpers now move far more slowly. Due to the second lap being the final lap, the jingle that plays when entering the second lap in previous appearances is no longer present.

This course is a favorite of Baby Mario, Blue Yoshi, Waluigi, Peach (Kimono), Pauline (Party Time), Luigi (Golf), Donkey Kong Jr. (SNES), Lakitu (Party Time), Meowser, and the Donkey Kong Mii Racing Suit. It is also a favorite of Mario (Hakama), Dry Bowser (Gold), and the King Bob-omb Mii Racing Suit if they reach level 3, and Metal Mario and Luigi (Lederhosen) if they reach level 6. As with other courses in the game, Waluigi Pinball has an R version, a T version, and an R/T version referred to as Waluigi Pinball R, Waluigi Pinball T and Waluigi Pinball R/T respectively; the former two were introduced alongside the regular version in the 2019 Halloween Tour, while the latter was added in the Valentine's Tour.

The course icon for the R/T variant has an error within it. It features a trick ramp next to the red bridge despite not appearing in-game.

As of the Animal Tour, the course has appeared in twenty-eight separate tours, the most out of any course in the game (not including courses with multiple routes).

Waluigi Pinball makes its home console debut in Mario Kart 8 Deluxe as part of Wave 2 of the Booster Course Pass, appearing as the fourth and final course of the Turnip Cup. The course uses its design from Mario Kart Tour, albeit with enhanced graphical updates. The rotating bumpers have been reverted to a faster speed, retaining their clockwise rotation first changed in Mario Kart 7. They can also now be crashed into when using a Star, flying into the air as a result. Several groups of spectators consisting of Shy Guys, Toads, Yoshis, and Koopa Paratroopas have now been added in various locations outside of the track's playable area, such as the sides of the chute behind the flippers and around the stretch of road after the gap jump leading to the pinball table, and a helicopter now appears above the large image of Waluigi at the end of the course. The flippers now give off an electric particle effect after activating. The sounds that play when changing positions are no longer present, and the pinball lost sound effect no longer plays upon re-entering the pinball launcher; however, the latter can be faintly heard in the course's introduction cinematic. It is the longest three-lap course in the game, superseding Toad Harbor from the original Mario Kart 8. Like its debut game, the course shares its music with DS Wario Stadium, making these courses the only courses to share the same music in Mario Kart 8 Deluxe. Waluigi Pinball was one of two courses whose music was used for the reveal trailer for Wave 2 of the Booster Course Pass, alongside Sky-High Sundae, not including Mario Kart 8's Rainbow Road, whose music was also used in Wave 1's promotional material.

Waluigi Pinball makes a cameo appearance in the 2006 release of the Nintendo Monopoly board game. It can be seen in one of the screenshots making up the montage of images from various Nintendo games.