From the Super Mario Wiki, the Mario encyclopedia
(Redirected from Cactus King)
Jump to navigationJump to search

Ghastly King is the supreme king and main antagonist of Donkey Kong Jungle Beat. He first appears as Cactus King in the game, although their shared appearance and Japanese name indicates that they are the same being. He appears as a monstrous, unnaturally colored Kong several times larger than the others. In New Play Control! Donkey Kong Jungle Beat, an eavesdropping Helper Monkey says he plans on taking over the world.

Like the other bosses, Ghastly King has 500 HP in both fights. He can be attacked by either encountering him face to face, or by throwing him into the walls, which momentarily knocks him out and allows the player to punch him. If the player attacks him face to face, Ghastly King attacks Donkey Kong with a backhand slap, throwing him into the wall. If Ghastly is attacked enough times, he flies into the wall and is momentarily knocked out. 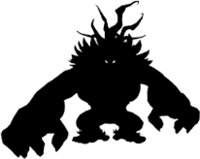 An unused silhouette of Ghastly King.