Silver the Hedgehog is a recurring character from the Sonic the Hedgehog franchise. He is a fourteen-year-old hedgehog who comes from at least two-hundred years in the future. He commonly travels through time to assist Sonic and his friends. He has the ability to use psychokinesis which allows him to move objects with the power of his mind, but unlike most hedgehogs from the Sonic the Hedgehog series, he lacks super speed. He was originally voiced by Pete Capella, who voiced him in Mario & Sonic at the Olympic Winter Games; but was later replaced by Quinton Flynn, who voiced him until 2017. Bryce Papenbrook later replaced Flynn in 2019, first voicing him in the Mario franchise in Mario & Sonic at the Olympic Games Tokyo 2020. 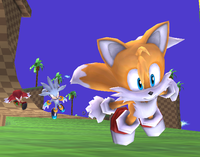 Silver the Hedgehog makes a cameo in Super Smash Bros. Brawl, running in the background of the Green Hill Zone stage along with Miles "Tails" Prower and Knuckles the Echidna. He also appears as a Trophy and a Sticker in the game.

In Super Smash Bros. Ultimate, Silver appears as a spirit. Silver also reprises his role as a background character in Green Hill Zone.

Silver was originally going to appear in Mario & Sonic at the Olympic Games, but was scrapped later on. A beta file of Silver was found on the European version and can be playable by hacking.

Silver appears in Mario & Sonic at the Olympic Winter Games as a Skill type playable character. His signature move for the Wii version is Levitate and Teleport Dash for the DS.

Silver returns as a Skill type playable character in the Wii version of Mario & Sonic at the London 2012 Olympic Games, where he can be seen in the opening with all of the other athletes at the beginning, and later competing in Beach Volleyball. A Mii outfit based on Silver appears as an unlockable item in the game, and Silver also appears as a character that can be spoken to in London Party mode in order to play minigames and earn stickers.

In the Nintendo 3DS version, Silver is included in the Challengers group, meaning that he is only playable in certain Events. In the Story Mode, Silver first appears with Shadow after defeating some Fog Imposters, where they ask Yoshi, Sonic and Tails what they know about the Phantasmal Fog and Fog Imposters. He later helps the group chase down Jet, and then defeat Bowser Jr. so that Shadow can destroy the Fog machine and clear the area. Silver later appears calling Mario, Luigi, Sonic and Tails to support them when they face Bowser and Dr. Eggman, and also appearing at the opening ceremony. In the bonus episodes, Silver appears with Shadow facing some of Dr. Eggman's robots, but after Bowser Jr. defeats them both himself, they challenge him to an Olympic event instead. When Bowser Jr. wins, Silver and Shadow pretend to be angry at first, but later congratulate Bowser Jr. before heading off. A badge of Silver can be obtained from the badge machine.

Silver reappears as a playable character in Mario & Sonic at the Sochi 2014 Olympic Winter Games. He is once again a Skill type character.

Silver reappears in Mario & Sonic at the Rio 2016 Olympic Games as a playable character. In the Nintendo 3DS version, Silver is exclusive to 110m Hurdles and Archery.

Silver reappears in Mario & Sonic at the Olympic Games Tokyo 2020 as a playable character. Like many other Mario and Sonic characters in the game, Silver wears outfits that are event-appropriate.

Silver the Hedgehog is a new competitor for Team Sonic. Coming from the distant future with telekinetic abilities, Silver's signature moves are the Levitate ability on the Wii and DS and Teleport Dash ability on the DS. Expect the unexpected when this time-travelling hedgehog takes on the Olympic Winter Games. 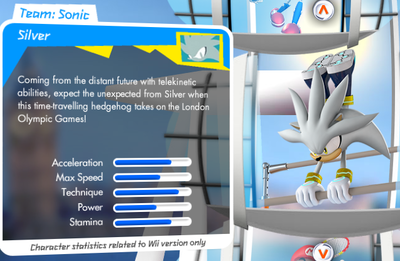 Coming from the distant future with telekinetic abilities, expect the unexpected from Silver when this time-travelling hedgehog takes on the London Olympic Games!