From the Super Mario Wiki, the Mario encyclopedia
(Redirected from Paper Macho Mummy Goomba)
Jump to navigationJump to search

A Paper Macho Goomba eating a house in Toad Town 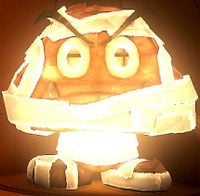 A Paper Macho Mummy Goomba in the Temple of Shrooms

Inside Temple of Shrooms, there are mummified versions of Paper Macho Goombas known as Paper Macho Mummy Goombas. These enemies are wrapped in bandages and have no differences in battle. However, when Mario hammers the ground, a set of holes appear nearby. If Mario falls in the hole, the player must press

repeatedly for him to jump out. The holes disappear if a nearby square button is pressed. According to the Collectible Treasure featuring these particular Paper Macho Goombas, they are not actually mummies, but are simply cold, and have wrapped themselves in bandages to keep themselves warm.

In Hotfoot Crater, a horde of slightly smaller Paper Macho Goombas chase Mario, Kamek and Bowser Jr. up the volcano. Kamek creates clones of himself to hold back the horde while Mario and Bowser Jr. keep going, but gets trampled after a short while. Bowser Jr. later creates a ditch where he attempts to fight off the Paper Macho Goombas, but gets overpowered. Bowser, who is waiting near the top, then shoots a fireball to knock down a stalactite that blocks the horde, allowing Mario to escape. If Mario gets overrun by the horde, it will result in an instant Game Over.

A Paper Macho Goomba is fought in the first stage of Scuffle Island, with the title Stomping Sentry. Defeating it is worth 100 coins, but there are now three stickers on its back that Mario must hammer before he can inflict any damage.