From the Super Mario Wiki, the Mario encyclopedia
(Redirected from Rainbow Road (N64))
Jump to navigationJump to search

Rainbow Road is the last race of the Special Cup in Mario Kart 64, as well the sixteenth and last course in the game. It is the longest racecourse in Mario Kart 64, at 2,000 meters (2 kilometers), and requires about two minutes per lap, making it the longest three-lap track in the whole series. The track differs from the other Rainbow Roads in that it has rails throughout the entire track. The track features a transparent multicolored glass path with star-shaped rails running throughout the entire course. Neon-light pictures of the eight playable characters and a portrait of a Boo and a Mushroom are found in the distance and float in the void. Moreover, a big three-dimensional smiling star lies in a curved section of the track. Roving Chomps slide through the course in a zigzag pattern, and colliding with them will cause the player's kart to crash and be thrown into the air. The course returns in Mario Kart 8 and Mario Kart 8 Deluxe as the fourth and last course of the Lightning Cup. The big drop at the start. The player can make a long jump over it by hopping with precise timing when the road starts to descend, as seen in this picture.

The course starts with a huge drop followed by a gentle uphill stretch passing through a rainbow ring. After the ring, there is a wide loop with neon signs of Mario, Peach and Luigi on the loop's outside. Following the loop is a steady downward road that crosses over the steep drop where a Mushroom sign can be seen. After the bridge is a corkscrew loop with a large star in the center and a Boo sign at the corkscrew's outside. Racers turn around a corkscrew to reach a hairpin bend, where signs of Donkey Kong and Yoshi are seen. Shortly after the hairpin bend is a short straightaway followed by a smaller drop and small uphill stretch. A Toad neon sign can be seen after the drop as well as a wide right turn. A straightaway follows with a Wario sign present, then follows a final looping section, where a Bowser sign is seen near the end of the track. After the loop is a final straightaway to the finish.

It has been requested that this section be rewritten. Reason: too long 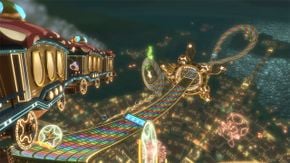 N64 Rainbow Road as it appears in Mario Kart 8

This version of Rainbow Road returns in Mario Kart 8 and Mario Kart 8 Deluxe, where it is the last course of the Lightning Cup. It was the final race in the former game until the sixteen DLC courses were released. It takes various elements from the Rainbow Roads of all other previous installments, except for Mario Kart: Super Circuit. Like Rainbow Road from Mario Kart: Double Dash!!, the course now takes place above a brightly-lit city near a coast at night instead of the deep space from the original. The Princess Peach Statue of Liberty from Toad Harbor and the course itself can be seen in the city setting, and in the center of the city below, there is a tower that faintly resembles the Eiffel Tower, with four ? Blocks, a Mushroom, and a spinning Star visible on top of it. Christmas trees can also be seen scattered throughout the city. Also, there is a moon in the sky that can be seen right after the starting line.

The road is now formed by multicolored tiles made of glowing LED lights (similar to SNES Rainbow Road) laid out in a diagonal color pattern within a golden frame, as opposed to the slightly transparent glass stripes from the original version. The start-finish line (and the segment checkpoints) has a bronze diamond mosaic pattern with glowing star rings surrounding the rotating banner.

The starting banner is now a rotating, star-shaped planetary gear. When players nearly reach the finish line, the outer gears will change shape by expanding their star-shaped appendages wide and closing in upon themselves. A scrolling LED sign reading "RAINBOW ROAD" in the NES font can be seen in the inner part of the gears.

There are now some nods to Super Mario Galaxy on the course. Namely, the large star in the circular loop has been replaced with a Grand Star and the star rails are now designed after Launch Stars, like the Rainbow Roads from Mario Kart Wii and Mario Kart 7. Most of the railings have been removed, adding to the challenge. Another addition is a flying train that travels around the course, ridden by Toads who, like the Toads on the ship in Bone-Dry Dunes, throw coins onto the track. The neon lights are replaced with fireworks, with some that form the six playable characters that have been present since Super Mario Kart (Mario, Peach, Luigi, Yoshi, Toad, and Bowser). 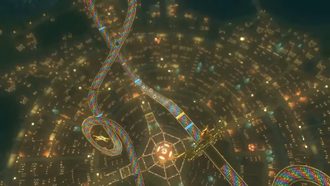 The other major change is that the course has been greatly altered to incorporate the game's hang-glider and anti-gravity mechanics. At the gentle uphill stretch, which succeeds the steep slope, the rainbow-colored rings are now an anti-gravity panel. The circular loop now lies on the right side of the course instead of on the left side and is inclined at a near-90 degree angle to act as an anti-gravity section. The dip after the large U-turn is now another smaller U-turn. The Chomps are now larger, and instead of sliding through the course in a zigzag pattern, they bounce repeatedly, creating ripples on the track that can be used to perform aerial tricks. As the Chomps land, the section they create a wave on will flash. Along the course, Dash Panels have been added and come in the form of small Launch Star-shaped rings that spin every time a racer passes through. The placement of these first two Dash Panels on the steep slope and the first two Launch Stars varies every time the player enters the race on this course. There are also rings that can be reached with a Glide Ramp. The final stretch before the finish line is now slightly sloped as an anti-gravity section and ends with a glide ramp.

In addition, similar to Rainbow Road from Mario Kart 7, the course is now run as a single lap divided into three sections, instead of three laps, and the last part before the finish line has also been slightly shortened to cut down the length of the course. On the third section, the chorus of the music now starts to play, instead of the beginning of the music. It is the first and only retro course to do this, and one of only three courses in Mario Kart 8 to be a segmented race rather than a lap race (the others being Mount Wario and Big Blue). The music has also been updated and was performed by the Mario Kart Band.

In a minor note, a map of the city beneath the course, mentioning Toad Harbor, Wii Moo Moo Meadows, and Wii Wario's Gold Mine, can be seen in Super Bell Subway. Thus, this Rainbow Road is likely set above those courses[1]. The railway lines that can be seen from this Rainbow Road, according to the map in Super Bell Subway, connect this city to many other places where tracks of Mario Kart 8 can be found.[2]

The course's map has been rotated upside down, and due to the alterations to the third segment, the turns prior to the finish line form an '8' on the map, similar to the '8' in the new Rainbow Road's track layout. Both of these Rainbow Roads are the only non-DLC courses in Mario Kart 8 and two of the only four including the DLC courses (the other two being SNES Rainbow Road and GCN Baby Park) to have the map in different colors instead of just blue (though all four of them are white in Deluxe).

Finally, this course appears on the box art of Mario Kart 8 Deluxe, being the only retro course in a Mario Kart game to hold this distinction.

The level's appearance in F-Zero X.

F-Zero X features the N64 Rainbow Road as Rainbow Road: Psychedelic Experience. It is the first course of the Joker Cup (the game's equivalent to the Special Cup). Parts, though not all of it, are rainbow-colored. Unlike the original, it has no barriers in certain areas, and the neon Mario franchise decor is missing. Instead, it just has a plain black background with a watery blue bottom to which careless drivers may fall. In addition, when racing the track with the 64DD expansion features, the background song is a rock version of the Rainbow Road song heard in Mario Kart 64 (the regular version uses the track used in Sectors α and β). The Chomps are replaced by deadly minefields on certain sections of the track which will cause drivers to crash or destroy their vehicle.

"This is a hugely popular track, and for the full HD version we worked on the arrangement to bring out its full beauty. You'll be pleased to hear that those lovable Chain Chomps are alive and well in this title."

When a player is playing the course, the neon lights of Mario, the Mushroom, and the Boo are the only ones that are animated.