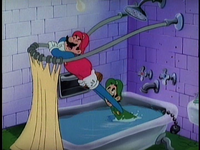 The bathtub scene of The Mario Rap.

It's the Mario Brothers and plumbing's the game
Found the secret warp zone while working on a drain
Lend the Princess a hand in the mushroom land
Join the action with the plumbers, you'll be hooked on the brothers!
Now...
Evil Koopa and his Troopas are up to misbehavin'
They kidnapped the Princess; Mushroom Land needs savin'
Abusin' and confusin' everybody he discovers
They can't help but be hooked on the brothers, uh!