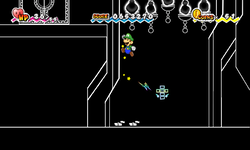 The super jump is Luigi's special move in Super Paper Mario, based on Mario's Spring Jump from Paper Mario: The Thousand-Year Door. It deals double damage and can be used as either an attack or a means of elevation. When the player presses and holds

(the height of Luigi's super jump depends on how long the player holds the button), Luigi begins folding like a spring, and then, when the button is released, he blasts upwards, like a spring, followed by a slight stream of trailing stars, which will harm all objects above him. If he hits a ceiling, however, Luigi will float back down slowly like a piece of paper then jump up again. The super jump is disabled when Luigi is first playable during a chapter intermission, however, and can only be used once Luigi is properly unlocked in Chapter 7. Mr. L uses this as one of his attacks in the battle with him in the Whoa Zone along with Shadoo's first form in the Flopside Pit of 100 Trials. Both Mr. L's and Shadoo's version differs slightly from Luigi's in that it has a quicker charge-up time and does not cause them to hit the ceiling when in smaller rooms.