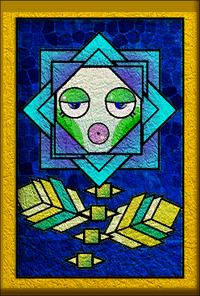 A portrait of King Croacus III

King Croacus III was the third ruler of the Floro Sapiens from Super Paper Mario. At age 1, he became the youngest king in Flora history after his mother wilted. Due to his young age, a regent ruled in his place. He was afflicted with a disease at birth, which made him weak and sickly. He had a great talent for art and poetry, releasing a book of poems called Ice Rose, at age 37. He wilted at age 88 for unknown reasons, but some suspected a conspiracy. He ruled from the Flora Calendar's years 1298 to 1385, the shortest rule of any Floro Sapien king. Due to his early death, he did not change the Flora Kingdom much. His regent succeeded him as the ruler of the Floro Sapiens, as King Croacus IV.

King Croacus the Third (Reign: 1298-1385). Croacus III was one when his mother wilted. He became the youngest king ever. The young king had a great predilection and talent for poetry and art...His talent was evidence in works like "Ice Rose", a book of poems from his 37th year. But he was also afflicted by a terrible disease from the time he was born...Without ever impacting the affairs of his kingdom, he wilted at age 88. The cause of his wiltering was never made public. Many suspected a conspiracy...This was never confirmed.