From the Super Mario Wiki, the Mario encyclopedia
(Redirected from Climbing Grass)
Jump to navigationJump to search 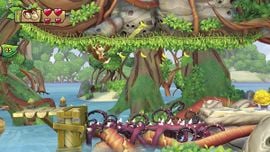 Climbing grass[1] is a type of vegetation found in Donkey Kong Country Returns, Donkey Kong Country Returns 3D, and Donkey Kong Country: Tropical Freeze. It is grown along various surfaces, such as platforms, walls, and ceilings, and can be grasped and climbed in the same manner as vines to escalate said surfaces. This can be done to cross pits and other obstacles or access certain platforms and rooms. Climbing grass may also lead to secret areas with items such as Puzzle Pieces, though most of the time these paths are obscured by foreground elements, such as leaves.