“I have harnessed the power of the black paint! Nothing can stop me now!”
—Black Bowser, Paper Mario: Color Splash 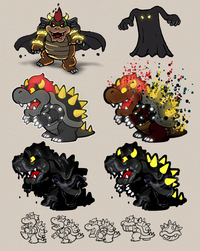 Black paint is a toxic substance in Paper Mario: Color Splash. It is created when all six of the normal colors of paint are haphazardly mixed together, as shown when Roy Koopa mixes up all of Mario's paint in his battle and when Bowser spins around in his shell in Prisma Fountain, mixing all of the colors together. Throughout the events of the game, it possesses Bowser (turning him into Black Bowser) into stealing the Big Paint Stars of Port Prisma and ordering his minions to drain the island and its inhabitants of their color. Roy Koopa also used black paint in his battle against Mario and Huey, but it did not seem to impact his thoughts.

Black Lava Bubbles also form from the black paint that drops from Black Bowser in the latter's battle against Mario and Huey.

The substance is also supposedly painful to touch, as Mario takes 30 HP of damage when he touches it in Sunglow Ridge. Huey can get rid of large portions of the substance by himself in a short time, although how he does so is kept off-screen.