It has been suggested that this page be moved to Stone Bowser. (discuss)

Mecha Bowser,[1] also known as Bowser (Mechanical),[2] Mechanical Bowser,[3] or Stone Bowser,[4] is a giant robotic statue of Bowser's upper half. It appears primarily in Bowser's Castle in the Mario Kart series. A very similar entity is the Bowser Monument of Mario Kart 8.

Mechanical Bowser debuts in Mario Kart: Double Dash!!, appearing towards the end of Bowser's Castle. It slides horizontally along a rail next to a hairpin turn along the top of a castle wall where the track is, shooting large fireballs forward. It moves in a very jerky, mechanical manner.

In Mario Kart Wii, it reappears in the Bowser's Castle course in Mario Kart Wii. Its model looks almost exactly the same, though its movement is far more fluid and organic. It appears in the center of the track, halfway through the course, now seemingly coming out of the lava. As racers drive towards it, it launches large, bouncing fireballs which appear to have a hole-covered sphere inside of them at the middle of the track that eventually explode. The racers then drive past Mecha Bowser on either side of it, as the track splits into two when it reaches Mecha Bowser. 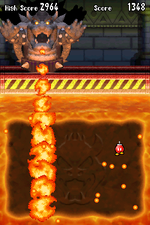 In New Super Mario Bros., in the Danger, Bob-omb! Danger! minigame, a Mechanical Bowser is the primary obstacle. It moves around, shooting fire in an attempt to light a Bob-omb Buddy. Using the stylus, the player must help the Bob-omb escape from the fire. Likely due to it being a sprite instead of a model, it has a more stony appearance.