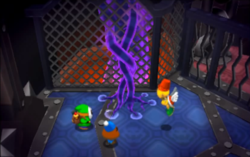 The Elite Trio observing a Dream Vine in the castle foyer.

“Corporal Paraplonk: The vines are sorta creepy... I mean, they're great, but...
Sergeant Guy: Agreed. They are suspicious. A guy has to wonder... What kind of energy is flowing through them? It looks...off.”
—Corporal Paraplonk and Sergeant Guy, Mario & Luigi: Dream Team

Dream Vines are strange, purple vines that appear in Neo Bowser Castle in Mario & Luigi: Dream Team. These vines are found through the castle, from small tendrils to gigantic, column-sized ones (with smaller ones intertwining with them), and glow as energy flows through them. Some tendril-sized vines come up from the castle's lava and wrap themselves around platforms, or climb up walls, transmitting energy into them. Others appear as tree-like structures with dream energy swirling at the bottom.

When Mario and Luigi enter the main hallway of Neo Bowser Castle, they find Private Goomp, Corporal Paraplonk and Sergeant Guy observing a giant Dream Vine, pondering about the nature of it. As the Mario Bros venture deep into the castle, and make their way to Bowser's bedroom, they find the source of the vines, all converging like a heart at the central platform where Bowser is sleeping. It is revealed that the vines originate with Antasma[1], with Prince Dreambert theorizing that Antasma is absorbing and converting Bowser's dreams into energy[2]. The energy produced through Bowser's dreams pulse through the vines distributed throughout the castle[3]. The vines function like arteries in a circulatory system, powering the castle (how exactly it powers it is never explained). The energy flow from the vines would cease when Bowser wakes up, but is impossible because of a barrier that protects him[4]. Prince Dreambert binds himself to the vines, merging Luigi's dream with Bowser's. After the Mario Bros. defeat Bowser in his dream, he wakes up, causing the energy from the vines to stop flowing, with the vines turning gray in the process.