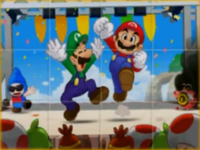 Skillit is seen at the bottom left

Skillit is a Shelltop that lives in Wakeport and appears in Mario & Luigi: Dream Team. He runs the Mad Skillathon minigame, which allows the Bros. to rack up combos with their Bros. Attacks in order to win prizes.

Skillit is very enthusiastic, acting as a host for the Mad Skillathon's events. When Mario and Luigi first encounter him, he initially mistakes them for comedians and seems disappointed by their lack of "skill", but upon being shown their Bros. Attacks, he seems confident that the two have what it takes to participate in the Mad Skillathon. He talks using slang like "dawg" and "playa".

His name is a portmanteau of "skill" and the slang term "kill it", meaning to do something perfectly.