From the Super Mario Wiki, the Mario encyclopedia
(Redirected from Donkey Kong Country (show))
Jump to navigationJump to search

Donkey Kong Country is a computer-animated musical television series based upon the video game trilogy of the same name. The program first debuted in France on September 4, 1996, on France 2, and then premiered in Canada on Télétoon on September 8, 1997 as a launch programme. The English version made its worldwide debut in Canada on Télétoon's English counterpart Teletoon on October 17, 1997, once again as a launch programme. The show then aired in United States on the Fox Family Channel on August 15, 1998 (occasionally airing on Fox Kids), and the original run finished on July 7, 2000. In Japan, the series aired with a Japanese dub on TV Tokyo on October 1, 1999, and finished its run on June 30, 2000.[citation needed]

Donkey Kong Country ran for three seasons with forty episodes total. Like the Mario-based television series before it, this show generally followed an episodic format. During the run, however, there were some episodes aired out of order from the original airing, such as "Bad Hair Day" being aired as the third episode in its run in the United States despite airing first in France. The third season was produced by Chinese company Hong Gaung instead of Medialab, and so switched to a newer, sleeker style of computer animation and dropping the use of title cards for the intro to each episode. Also similar to the earlier Mario cartoons, each episode (excluding "Message in a Bottle Show") also features one or two original songs based around events in the episode performed by the cast.

Donkey Kong Country was one of the earliest television series to be entirely computer-animated, matching the artistic style of the video games. The CG animation style of the series was met with critical acclaim in France and Japan, but with mixed reception elsewhere. Despite this, the show has managed to gain a cult following, and even Nintendo itself has acknowledged its existence.

Some elements of the series appeared in later Donkey Kong video games such as Donkey Kong 64, which was released a year after the show had started airing on ABC Family (Fox Family). There was even a commercial for the Game Boy Color remake of the original Donkey Kong Country video game that featured Donkey Kong, Diddy Kong, and Rambi the Rhino (despite the fact that no Animal Friends actually appear in the show) fighting General Klump and Krusha over a giant version of the portable gaming system, all depicted with retooled versions of their designs from the show's third season.

The show portrays Donkey Kong, an anthropomorphic ape living in the jungle who happens to stumble upon a magic orb called the Crystal Coconut in the temple of Inka Dinka Doo. After finding the coconut, Donkey Kong is named the future ruler of Kongo Bongo Island. As he and his friends wait for the day when the Crystal Coconut will proclaim him the ruler of the island, they have to keep the relic safe from the clutches of King K. Rool and his minions, who desire the coconut so that their leader may rule the island using its power instead. 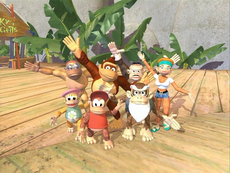 The series features almost all of the Kongs from Donkey Kong Country and Donkey Kong Country 2: Diddy's Kong Quest, the exceptions being Swanky Kong and Wrinkly Kong. However, the show also features several characters exclusive to the TV series, such as Eddie the Mean Old Yeti, Kaptain Skurvy and his crew, and Bluster Kong.

Two conflicting season numbering schemes exist for the show; Nelvana considers the show to have three "cycles" (13x13x14),[2] and this is the numbering used for the show's release on services such as iTunes[3], Pluto TV and Tubi. The show's official DVDs, however, identify two seasons, the first being made up of the 26 Medialab-produced episodes and the second being made up of the 14 Hong Guang-produced episodes. The Super Mario Wiki follows the former scheme.

Note that the episodes are listed in production order,[4] which differs from that of the original North American air dates.[5]

In addition to the animated series, Donkey Kong hosted on France 2 Donkey Kong Planet (also known as La planète de Donkey Kong, DKTV and DKTV.cool), which was a mix of children programming and original content featuring part of the Donkey Kong Country TV cast. The original segments featured Donkey, Diddy, Funky, and Candy doing musical numbers, parodies of current movies and television shows, and comedic sketches. It debuted on September 4, 1996, the same day the Donkey Kong Country TV series premiered, and the block continued its run on the channel until September 1, 2001.

“What could be more hip than turning the most popular 3-D game into a computer-animated series? Not only did "Donkey Kong" have a ready-made audience, but the lovable chimp lived in a cool place we'd all like to escape to- the jungle.”
—Computer Animation: A Whole New World

Donkey Kong Country was the first full-length television series to be entirely primarily using motion capture,[6] using Medialab's proprietary technology which allowed the animators to see the performance play out in real time.[7] Due to this attribute, the company prefered to use the term "Performance Animation" to refer to the animation style of the show.[8] This caused controversy when the show was rejected for an Emmy Award nomination, the reasoning being that the TV academy did not consider the then-new motion capture technique to be a form of animation.[9]

After writers finalized the characters' roles and personalities, artist Phil Mendez worked on the concept sketches, taking care to keep the characters' appearance simple and geometric to make them easy to convert into three-dimensional models.[10] The 3D modellers grouped characters with similar bodies into "families" and used the Alias/Wavefront modeling software to build the digital skeletons, using the "families" as a base to create the individual model.[11] Characters' heads were modeled in clay and then digitized.[12]

Though groundbreaking, the use of motion capture came with many challenges. As the models had to work for both live motion capture and traditional keyframe-based animation, Medialab had to optimize the models to keep the polygon count low.[13] Writer Simon Racioppa explained that due to the format's limitation, the series bible heavily discouraged new locations and characters, and characters could not be animated picking up objects (although them holding objects was possible). Animating water was also considered "next to impossible".[14] Speaking of the differences between Donkey Kong Country and ReBoot, a 3D animated series that did not employ motion capture, producer Maia Tubiana explained that making the models required "experimentation, discipline, and the ability to live with a few compromises", an example being having to shorten King K. Rool's cape to not interfere with the animation.[15]

According to a post on a fan page by Nelvana writer Erika Strobel, Medialab had originally obtained the rights to create an animated series from Nintendo. After thirteen episodes were written, Medialab asked Nelvana for assistance after firing the original writers (who, according to Strobel, had produced scripts "with racist/sexist jokes and just sooo bad for a kiddie show").[16] As storyboards had already been produced for ten of the original scripts, Nelvana decided to write new stories around these storyboards to save money.[16] The songs, however, were included at the request of Medialab; all of the show's songs, as well as the title theme, were written by Pure West Music.[16][17] Nelvana purchased the rights to the show after Medialab's license lapsed.[16]

Early reference sketches for production depict multiple concepts that were considered but ultimately unused in the show proper, including the Animal Friends characters Rambi, Expresso and Winky, a more game-accurate appearance for Candy Kong and a "desert" area for Kongo Bongo Island.

Alongside the opening theme, most episodes in the series feature two unique songs each, performed by one or more characters to illustrate certain points in the story.

It has been requested that this section be rewritten and expanded to include more information. Reason: include which songs each track plays in

The background music used for the songs in the show was taken from a variety of albums.

Donkey Kong Country was produced by Nelvana, and co-produced with Medialab for the first season, and Hong Guang Animation for the second season. The first season was animated by Medialab and the second by an uncredited CGCG Inc.[18]. The soundtrack of the series was composed by the music production company Pure West.

Four episodes were released in North America on a single VHS cassette titled, Donkey Kong Country: The Legend of the Crystal Coconut. Said episodes were edited together to make them seem like one continuous storyline. However, these episodes were not put together in the proper order; for example, a flashback shown in the third episode actually happened in the fourth episode of the tape. The American version of the tape was distributed by Paramount Pictures, Nintendo, and Nelvana. Advertisements and even the videotape's packaging neglected to mention the actual TV series the episodes originated from, and was instead marketed as a standalone film (leading to some confusion among newer viewers of certain content, such as Eddie the Mean Old Yeti's brief appearance in Ape-Nesia).

The show is also available on iTunes.

The show had a large line of merchandise in Japan, including a collectible card game by Nintendo and Ahomaro Games. A subsequent release of the card series featured characters and gimmicks based on Donkey Kong 64. The television series took over the TV Tokyo Friday 6:30 P.M. timeslot from Gokudo, and was later replaced with Hamtaro. As with most programs in Japan, the show has received home releases through rental tapes.

The television series also received a dedicated two-part manga. The two editions were seen in the Japanese CoroCoro Comics, published by Shogakukan in 2000 and 2001 respectively.

DVDs and one VHS were also released: