From the Super Mario Wiki, the Mario encyclopedia
(Redirected from Bolshoi Theater)
Jump to navigationJump to search

The Bolshoi Ballet in the DOS version 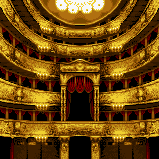 The Bolshoi Ballet in the SNES version

“Russian dance companies are the accepted stars of 20th century ballet. No troupe is more famous than The Bolshoi Ballet company, founded in 1776. Alexander Gorsky, director of the Bolshoi until 1942, is one of the most important people in the ballet world. It is said he made the dances more interesting to modern audiences by introducing the idea of realism into choreography and scenery. The Bolshoi Theater was built in 1856 and seats 2000 ballet fans.”
—Pamphlet, Mario is Missing!

The Bolshoi Theater (in Russian: Большой театр, Bolʹshoĭ tyeatr) is a theater that hosts numerous ballet and opera performances, and most notably serves as the base for the Bolshoi Ballet troupe. In Mario is Missing!, it is one of the landmarks in Moscow that gets ransacked by Koopa Troopas (although the game calls the building the Bolshoi Ballet more often than not). In the NES and SNES versions, a Bolshoi Ballet slipper is stolen, whereas in the DOS and Deluxe versions, a Bolshoi Ballet Tutu is stolen; in either case, the entire theater is shut down due to the theft. Luigi is tasked with returning the stolen clothing article to the theater so that it can be reopened, but he must prove that they are real by answering the questions below: