From the Super Mario Wiki, the Mario encyclopedia
(Redirected from Railroad)
Jump to navigationJump to search 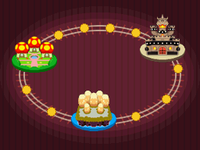 A map of the Project K railroad

Project K is a railroad from Mario & Luigi: Bowser's Inside Story. It connects three disparate locations in the Mushroom Kingdom: Toad Town Caves, the Tunnel, and Bowser's Castle. Bowser and the Monty Bros. dig the railroad while Bowser is pursuing Fawful to the Toad Town underground. Later, the Fawful Express is fought here.

Only Bowser can traverse the entirety of the railroad using his spike ball move; the track is blocked off by boulders on both sides of the Toad Town Caves entry point to prevent Mario and Luigi from traversing the tracks.