From the Super Mario Wiki, the Mario encyclopedia
(Redirected from Squall Hammer)
Jump to navigationJump to search

“In Ice Climber, Popo and Nana are identical outside of their clothing. Two players can play at the same time, and the game can be cooperative or competitive depending on how you play.”
—Tips, Super Smash Bros. Ultimate 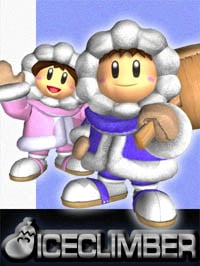 The Ice Climbers appear as a new, playable default character in Super Smash Bros. Melee. The two are unique, as they fight as a team, but act as two separate characters. Depending on the alternate costume, the player can control either Popo or Nana, while the other is a computer player that copies their inputs and returns to the player when they are separated. The Ice Climbers attack simultaneously, and as they are two characters the player can grab two opponents and hold two items at once. If the second climber is KO'd, the leading one can still fight, but their attacks are not as powerful as they would be if both are present. However, if the player-controlled climber is KO'd, they are both sent back to the respawn platform. Also unique to the Ice Climbers is that they have normal traction on slippery ground.

Both Popo and Nana are voiced by Sanae Kobayashi. 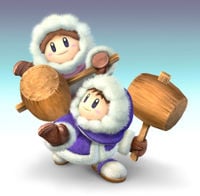 The Ice Climbers return to the series in Super Smash Bros. Brawl, retaining their moveset and attributes from Super Smash Bros. Melee. However, both Ice Climbers are able to grab a ledge at the same time; in the previous game, the other climber cannot grab on if one is already on the ledge. Their Final Smash is Iceberg, in which they create a large iceberg in the middle of the stage.

The Ice Climbers' snapshot in The Subspace Emissary

The Ice Climbers were first seen climbing up the Glacial Peak, completely oblivious to the shootout between the Great Fox and the Battleship Halberd. However, they do see Meta Knight climbing past them, trying to get to the Halberd. The Ice Climbers see this as a challenge, and race him to the top, managing to reach it first. However, they discover the Aura Pokémon Lucario up there, who challenges Meta Knight. Popo and Nana could only watch. Just after the battle, the Halberd rams the Great Fox into the mountain. While Meta Knight and Lucario take this chance to get inside the Halberd, the Ice Climbers fall into the Canyon, where they find themselves with Marth, Lucas, the Pokémon Trainer, and Ike. The Subspace Army attacks them all, but they are saved by Mario, Link, Yoshi, Kirby, and Pit. The Ice Climbers eventually go to Subspace with all of the heroes, where they all get turned into trophies by Tabuu. Fortunately, Kirby is then revived by a badge created by King Dedede, so he saves Popo and Nana along with some other characters. The entire team then goes after Tabuu.

On a side note, the Polar Bears from their series appear as enemies in the 3DS-exclusive game mode, Smash Run. 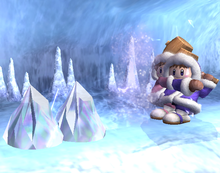 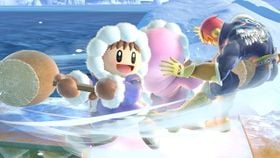 Squall Hammer is the Ice Climbers' side special move. Popo and Nana spin forward with their mallets held out in the direction the Control Stick is tilted. It deals approximately 7-19% damage. The attack is less effective if only one Ice Climber is in battle. In Super Smash Bros. Melee, Popo and Nana use only their left hands to swing the mallets, as opposed to Super Smash Bros. Brawl, where they use both of their hands to swing their mallets. 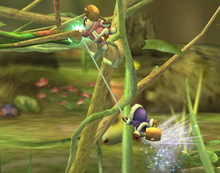 Belay is the Ice Climbers' up special move. Popo/Nana throws their partner up into the air, allowing them to use a belay to pull themselves upwards. It is also able to damage anyone who gets in the way of the attack. The attack is far less effective if only Popo/Nana is in the battle, where the solo Ice Climber performs only a little hop, and has no effect when used on the ground. Both Ice Climbers are put into a helpless state once the move finishes. 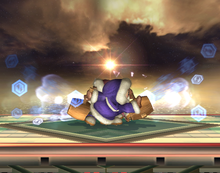 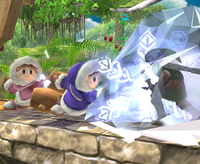 Link gets frozen by Blizzard in Super Smash Bros. Brawl 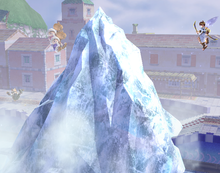 SmashWiki article: Iceberg
“Ice doesn't just make the available ledges smaller and more slippery, but it also damages your opponents! But, of course, the Ice Climbers can handle it no problem. They look as cool and refreshed as ever.”
—Masahiro Sakurai, Smash Bros. DOJO!!

Iceberg is the Ice Climbers' Final Smash. Once the Ice Climbers break the Smash Ball and the move is activated, the two high-five each other and a giant iceberg appears from below, taking up a large amount of space on stages. This not only freezes any platform in the surrounding area, but also damages any opposing player who touches the iceberg, doing a heavy amount of damage and sometimes freezing them. The attack can also be done with only one Ice Climber, and if done by one Ice Climber, the solo Ice Climber raises their hammer to call the iceberg. Players can attack the iceberg to shrink it, though the iceberg shrinks completely after a period of time.

In Super Smash Bros. Ultimate, the Final Smash is slightly different. The iceberg now revolves, and no longer freezes opponents, instead only damaging them. The condor flies overhead, which the Ice Climbers can grab as it flies back and forth above the stage. The Polar Bear from Ice Climber can also be seen teetering on the side of the iceberg. 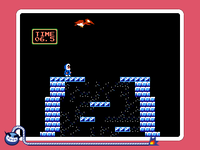 Popo in the Ice Climber microgame in WarioWare Gold

The Ice Climbers appear as one of the add-on Mystery Mushroom costumes that are unlocked after completing an Event Course titled "Popo & Nana's Climbing Challenge" in Super Mario Maker. Their animations and sound effects are taken directly from their original game.

"Back in the battle after a ten-year absence! There are two of them, so does that make them twice as strong as other fighters?"