From the Super Mario Wiki, the Mario encyclopedia
< The 'Shroom:Issue 117
Jump to navigationJump to search 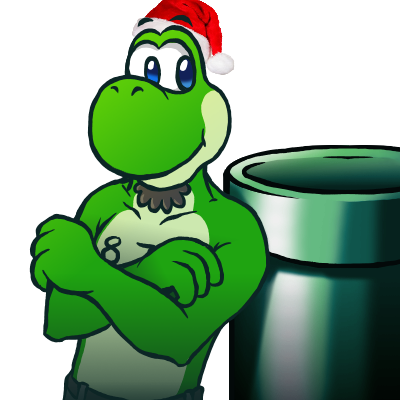 
Ho! Ho! Ho! Merry Christmas 'Shroom readers! I hope you enjoy this "festive" edition of Pipe Plaza, because we certainly enjoyed writing it for you.

Like I mentioned last month Alex95 (talk) resigned from New Articles, well his position has now been taken by LudwigVon (talk). Shokora (talk) was unable to contribute Projects Seeking Contributors this month, and Forum Update is back in the paper.


Hello, readers, and welcome to the last Monthly Report of 2016!! Things are pretty much the same here, so let's see the wiki stats for December, along with a comparison between them and the stats from last month.

(Credit goes to Stooben Rooben (talk), Super Mario Bros. (talk), and Viper26 (talk) for the table coding (I based this on Stooben's coding, which was later modified by SMB, myself, and Viper26 when each one of us wrote this section)

I hope you all have enjoyed this section as much as I did while writing it!! Happy Holidays everyone!!!


Hello 'Shroom readers and welcome back to another edition of Featured, the only place this side of the Mario Wiki where you'll get news about the Mario Wiki Featured Articles.

Two new articles have been featured in the past month.

There is one ongoing Featured Article Nomination.

There are two ongoing Unfeature nominations.


When your talk page grows too long, it can be difficult to find important messages and sort through any you may not have responded to yet. There is a way to de-clutter your talk page. You archive the contents of your talk page into a new page, something like "User:XXX/Archive1". To do this, simply copy everything on your page, then paste it onto the new page. You can delete everything on your current talk page after you save the archive, unless you have conversations that are still active.


Hello, readers! Welcome to December's Community Report. It shows our the latest goings-ons around the Super Mario Wiki – the promotions, the demotions, the recently passed and ongoing proposals.

NOTE:All stats and figures included in this section were correct as of December 16th.

That’s all for this issue of Community Report. See you again next year.


Hello! Welcome to New Articles. I’m LudwigVon, the new writer of this section, and I’m here with an up to date about all the new articles created within the past month. So, we got plenty of new articles and it’s great. Be sure to keep in mind Super Mario Wiki’s Manual of Style when you create an article.

Written by: MrConcreteDonkey (talk)
Welcome back to the Forum Update! This month, we're looking back at September, October and November - that's an entire autumn's worth of forum updates you're getting! And if you think that's not a suitably festive gift for Christmas, then yyyyyeah you're probably right

Bold means a new entry. Italics mean inactive for at least a month. Bold and italics mean there's a glitch in the Matrix.

Baby Luigi's Do you prefer Waluigi's classic or modern design? won September's Thread of the Month - an exploration of the history of Waluigi and his vast characterisation. Runner-ups included SiFi's Today I went to this arcade game-type exhibit thing. (long story with pictures) and Freakworld's THE YEAR OF POOCHY.

Thread of the Month for October goes to Freakworld's THE MOST BROKEN THREAD ON THE FORUM, containing use (and, eventually, an explanation) of a glitch in the forum's BBCode that was discovered during 'Shroom Mafia III. NSY's proof that marioboards is dying was a runner-up (despite attempting to do my job for me), as was Nabber's post javelin quotes.

November's Thread of the Month goes to Anton's Since not all of you have me on facebook and can't see my late-night ramblings, a few funny observations on his own life. I didn't want to give it to an election-related thread, but Stargazing's If you feel at all threatened because of the results of this election... was a runner-up, as well as Nysic's just hell.

What better way to write for the polls of this month than having a literal child in green write a 'Shroom section for the month of Holli Jolli Christmas? Uh, maybe Santa Claus himself but we all know he has a very busy schedule, and I guess I contribute it for having a particularly large wishlist filled with a bunch of toys.

Anyway, I'm here to talk about polls and stuff. Not sure if it's on anyone's actual wish list (and if it is, please give me a call and I'll say you're welcome) but here we go.

I don't think anything in particular happened aside from hot delicious egg nog being served. We did host the usual Christmas-themed poll in the week of Christmas so I hope you voted what you want, and we'll make sure we mail the results to Santa so you can get the game you want.

Do you tend to agree or disagree with Metacritic scores of Mario games? (Baby Luigi (talk), November 13, 2016)

None of these poll results are particularly surprising, but it's still always interesting to see the results of mindsets of random people who vote in our convenience sampling poll because you never know when you'll achieve surprising results which does happen.

We'll be looking forward to what Mario game you want the most for Christmas. And if not, maybe a nongame Mario product like various amiibo will suffice. I know for sure that I want some new Mario amiibo. So uh, have a great Christmas, with the closing of 2016, and we all hope your cookies and milk will be gone by sunrise of December 26th. Check out next year, 2017, with Andymii (talk) and he'll show you what he's got.

Hello, readers! I'm your Spotlight manager and Pipe Plaza Director, Yoshi876. Welcome to Retro Feature, a section in which I delve deep into the archives to bring you the best blasts from the past. This time I bring you a section from a previously featured writer: Marioguy1.

I'm not going to delve into the history of Marioguy1, as I've done that before, instead I'm going to let you enjoy one of my favourite sections from The 'Shroom: Fading Into Obscurity. Sadly, that section seems to have faded into obscurity.

This is the perfect place to mention an error that was pointed out to me in the Writer History spreadsheet and other mistakes that were noticed by me after learning of that error. Yoshi876 (talk) and YoshiKong (talk) were mistakenly credited with five Main/Staff sections written in 2009 (before they were both registered). This error was due to the cell coloring being accidentally copied from Yoshario (talk)'s row, which had happened before. When counting all of the remaining sections, the totals are brought to 47 and 19, respectively. Similarly, Icemario11 (talk) was credited for a nonexistent section in 2007 and Groden (talk) had one in 2009. These errors have been corrected, I apologize for this situation. If you see any errors in any of our spreadsheets, please let me know.

From Issue I (January '07) to VIII (October '07), it was WarioLoaf who held the record for most sections written; from VIII to XXIII (February '09) it was Xzelion; then came Stoob to tie on Issue XXIII; then it was myself from Issue XXIV (March '09) to 116 (November '16); and now, starting with Issue 116, it's going to be none other than Yoshi876, and there truly is no one more deserving of this honor than him. From his first section in Issue LXXVI (July '13), he has gone on to write a staggering 306 sections, having written a substantial amount of sections for each of our teams and over 120 sections this year alone. That's an average of over ten sections per issue, which is more than most teams have each month. And don't think for a second they're short sections, I can assure you they are detailed, well-written, and interesting sections. Congratulations to 876, may we have many more of his sections!