Alfredo, also known as "Blue Mario" or "The Third Mario Brother", is the little-known brother of Mario and Luigi. Unlike most obscure Mario characters, he doesn't have an insane cult following, but he has been known to appear where least expected.

He was also in the Donkey Kong board game, but that's going into the deepest depths of obscurity.

Pretty much the same deal as in Donkey Kong here, except now Alfredo's even bluer! 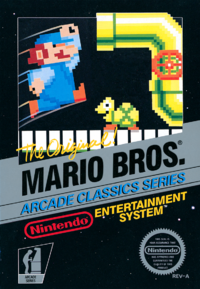 No, Alfredo didn't appear in this game. Not even in the worst of ports. He did, however, appear on the boxart for the NES version of the game.

Oh, and he was also in the Game Boy Advance remake.

If for some reason you're playing the PlayChoice-10 version of Super Mario Bros., then you'll see Alfredo on the second page of the instructions screen above the main screen.

If you're on the character selection screen, then one or both of the Mario Bros. will look like Alfredo when you have someone other than them hilighted. But not in the All-Stars version because then they're gray instead of blue and Alfredo's meant to be blue, not gray.

Alfredo doesn't make a direct appearance in Super Mario World, but he is referenced. Once the player beats the Special World, the blue Koopa Troopas wear Alfredo masks.

Another game where Alfredo doesn't directly appear, but this time he actually drives the plot. Bowser Junior tries to frame him, but when the Piantas see the blue Mario ruining their island they think "that's definitely Mario, arrest him at once." So when Junior realized how stupid these guys were he just went with it and said "sure, he's Shadow Mario now" and any connections to Alfredo were sadly dropped.

I can't guarantee that Alfredo was in any of these shows, but it wouldn't surprise me if one of the animators screwed up and painted Mario entirely blue, thus making him resemble Alfredo. Also there was True Colors I guess.

In the Nintendo 64 version of Mario Tennis, Mario serves as the referee. But if Mario's already playing, then Alfredo is the referee instead.

Alfredo appears in this game as an alternate costume for Luigi.

In this abomination, Alfredo finally got his own game! It was called Alfredo in the Fettuc, but nobody knows Jack about it. Not even Jack himself.

Yellow Mario is yellow. He's also so two-dimensional that Nintendo didn't even bother giving him a name, let alone an official relation to the Mario Bros..

Yellow Mario first appeared in the Donkey Kong board game. And that's about it.

Because Alfredo was busy, Yellow Mario was forced to star in the ZX Spectrum version of Mario Bros.. His presence was so sudden it turned everything else in the game yellow.

Oh, and he was also in the Game Boy Advance remake.

Yellow Mario doesn't make a direct appearance in Super Mario World, but he is referenced. Once the player beats the Special World, the yellow Koopa Troopas wear Yellow Mario masks.

I can't guarantee that Yellow Mario was in any of these shows, but it wouldn't surprise me if one of the animators screwed up and painted Mario entirely yellow, thus making him resemble Yellow Mario.

Okay, I may have made this one up, but good luck proving that.