I think instead of having a bunch of Archives, how about I make a subpage called User:Crypt Raider/Old Mail? I want you guys to vote plz ;) GrodenE T C El

Hey, Crypt Raider. It's me, Glitz Hawk! Do you want to sign up for my written story, "A Hawk's Life?" I can even put you in it! Sign up on my talk page and leave who you want to be in the story. My goal is 20 main characters. I have 4.

I was a spammer when our almighty emperor was around but now that he's gone, I'm just an innocent wierdo. Happy valentines day. -Munchy

WITH A LINK ON USERPEDIA

You are now not a character, but are still signed up. Be sure to tell me if you want to sign off of my story.

if you've seen my page you'll know my least favourite world leader is Kim Jong-il of North Korea, do you know of him?, be thankful you live in a country that's .... well not like the one he runs, you live in america right? Bigger sid 13:37, 23 February 2008 (EST) it works like this Kim says kill him the authorities kill him without question even if he has no good reason to do so, and you don't wanna know what do to their prisoners, thy're doing illegal (illegal here in UK), disturbing and offensive things to their inmates, I think I've said enough Bigger sid 15:42, 23 February 2008 (EST)

You're welcome. Once, this one guy I helped block came back and deleted my userpage. o.0 Anyway, I think that one spammer was Dummmmmmmmy, trying to annoy you again. Cya! I've never really met you; you seem pretty awesome. :D

You signed off of my story. Are you sure you don't want to get my story's chapters? You have 5 days left to answer me about this question.

Sorry about the character mix-up.

Oh. My bad. :P BLOC PARTIER. Hey, the main page looks a little better, you should go check it out. ;)

Same here. I thought maybe you had been sick or something, and that's why I hadn't heard from you in a while. And I'm going to sign up for the Car Wiki. I thought it was a gag page, until I seen you were the head cheese there! — Stooben Rooben Do I call you boss?
Here's teh first Car Wiki article! BEHOLD! — Stooben Rooben You liek?

Can you unblock me on Userpedia? My account was Sonic101. It was all a mistake.

Hi Crypted :P I voted on your idea, dunno if you're still wanting votes ur not. Just curious, but are you going to be getting Brawl?

Thanks, it actually turned out OK. I didn't humiliate myself at least. Hope you get that last vote soon!

actually doesn't have a radio either..

You liek the main page? — Stooben Rooben It took a while to find the pics.

Hey, i'm not THE GOOMBA, that is my brother Blue

Blitzwing and Cobold are picking on me, it's bad enough at school but on this wiki too, it's too much and remember the girlfriend incident they are laughing at that SmartyGuy11, drink moth worsh

my brother has returned as User:The Golden Goomba, Blue KoopC my brother got on as me when i went to the bath room, what did he do? --Blue Koop 10:41, 6 April 2008 (EDT)could you help?

I wasn't refering to TFE when I said newbs, I was refering to future users that may join, say... three months from now.-

I meant that I'm surrounded by idiots in real life, not in Userpedia. I have a story to make and If you don't unblock me I'll forget what I was going to write for the Prolouge. And I meant that someone such as Yoshor or Darkness Lair(or however you spell his username) who has less experience with wikis than I have(I first found out about wikis when someone mentioned Wikipedia on the Lego Club forums) might want to know about the fictional Mario Wiki History.-

Look, Crypt, I wasn't flaming Toadette 4evur, so it was a case of false arrest, in other words, you pretty much blocked me for no reason.-

Get over it KP. You've constantly caused trouble on Userpedia. Technically, this ban should have been a month according to the rules. Deal with it, or I'll extend your ban from 2 weeks to 1 month. — Stooben Rooben 20:07, 31 May 2008 (EDT)

Crypt, if this'll motivate you to unblock me, I named one of my chao in Sonic Adventure DX: Director's cut after you.-

KP, knock it off! You know you've broken the rules at Userpedia umpteen times and have gotten away with it. You know that you deserved this block, so you start complaining about it. And sysops won't be bribed into anything. they're responsible, that's why they're sysops. So just stop and live with it. SJ derp :P

In that case, I'm not blackmailing you. But what will it take to prove to you that I wasn't referring to TFE when I said n00b. And that threat was an empty threat, unless you're Michal Jackson in real life and in that case I did mean it. Look, I'm an innocent, eccentric and at times, self-centered, but innocent user. I've got two projects to work on on Userpedia and I won't be able to make one if I'm blocked forever so I will need to be unblocked. For more help learning your lesson for unblocking innocent users listen to "Riders in the Sky". I've learned my lesson and I won't flame, and the next time I get blocked, if there's a next one, I'll take it like a man and I won't complain. *Switches to more evil tone* Time to get the pie. BWA HA HA HA HA HA HA HA HA!!!-

So what? I'm only blocked on my home computer and I'm going to use my laptop to splice into my home computers internet service once I learn how, besides, I an entertain my self. There's still Fantendo, Unmariowiki, the Wikia Userpedia (which I am converting into Universal Userpedia), and other sites. I'm also going to look up how to hack a cauculator on google so that I can entertain some of my friends (and myself), so IN YOUR FACE, WORLD'S MOST HATED USERPEDIA SYSOP!!! Besides, I could get you arrested for racial discrimination, for only blocking users of certain racial background (Italian, Irish, German, or Puerto Rican. Take your pick). I happen to be friends with one of the sons of a former bodyguard of the governor of New York state, who was demoted to chaffeur.-KP Blue

Please no. I'm on my knees begging for mercy!! I have a comic and a story to write and they haven't even passed issue 10!! I promise not to take my anger out on other users and I'll even ask my uncle to set up an account to use for wiki technology upgrades. I'll even report to the sysops on spam attacks. I'll stop cursing without censoring, and I won't flame. Userpedia means everything to me. Without being able to edit on Userpedia, I'm a lost cause. I'll do almost anything to get unblocked. I'll even apologize to the users I've bothered over the months. *attempts to imitate the "doe eyes" scene from Shrek 2, then breaks out in tears* Just don't block me for longer than three months! *sob* I can't come up with any other ideas for what else I could do in excange for getting unblocked, but you could probably come up with some. *calms down* Do we have a deal. I'm betting that you've just gone to this point to see if I would go from aggrivated and cursing to breaking down in tears and begging for mercy.-KP Blue

Last word: Look, let's just forget this ever happened, terminate my KP Blue account on Userpedia, and give me a chance to start over. Instead of the slightly psychotic, random behavior that I use in school, I'll use my more sophisticated, calm, cool, collected, slightly nerdy, and slightly obsessive compulsive behavior that I use at home when not on Userpedia. Think of it as a Userpedia version of the United States Witness Protection Program. If you don't like giving people the chance to start over, then you're either a cold, hartless, demon that kicks puppies then huffs them.-KP Blue

I'm sorry for starting this huge fight. Let's just revert this to the edit that I reverted on the 1337 cave article, unblock me,erase all traces of this happening, and forget this ever happened. That way everybody is happy, and we don't have to continue this argument. You like?-KP Blue

What part of "ignore it, pretend it never happened, and erase all traces of it happening" do you not understand. And it wasn't sockpuppeting, It's not sockpuppeting if it's on a computer won't be used again.-KP Blue

Hey, Crypt! We haven't talked in a while. What's up?

Why did you block me in chat. I just wanted to have fun with you guys. I promise I'll obey the rules, (former) scout's honor.-KP Blue

How long is my ban in chat?-KP Blue

I only socked because I thought that you'd immediately kick me back out on chat. I didn't know that getting kicked on chat was more like a warning than a punishment, that's why I kept sockpuppeting. I deeply apologize. I hope that clears things up for ya. And if you let me edit on Userpedia again, I won't have to resort to... no, I won't tell you. Besides I can't think of anything. Besides, if I'm let back on Userpedia, I'll patrol pages for signs of spam. *salutes Crypt* Ten HUP!!! *marches away quietly*-KP Blue

I'm editing an Indiana Jones-themed Pac-Man remake that comes defeault with Game Maker 7 so that the main character is replaced with you and the scorpions are replaced with Spam Raider clones. Is it okay if I make an article on Userpedia about it when I can edit there again?-KP Blue

me using Uber Smart is no different than Blocky the Pirate, I think you all just like being spiteful, just because I have Asperger Syndrome like PP, BUT YOU AIN'T PICKING ON HIM R U? SmartyGuy11, be warned, I will get my revenge!

Just wanted to say I agree that a shout box would be cool.user:tanokki [1]

I'm making a comic so can I use your spritesuser:tanokki [2]

Hey Crypt, it's MarioGuy 11. It's been a while. I'm having problems uploading my new sprites. I know I've had this problem before... 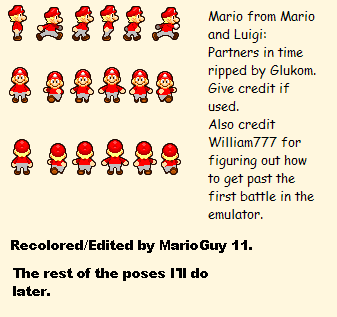 Hey, crypt. long time no see. remember me? I was on your Mi wiki. I made a new userpedia: http://userpedia.iskey.info/index.php/Main_Page I noticed you were very interested in userpedia when it was on. Did you retire from userpedia?

You have been cordially invited to participate as a special guest writer in the Special Issue of The 'Shroom conmemorating the 30th Issue.

You were chosen by the public to participate, so it would be great to have you in our staff for this issue. If you would like to participate, plase tell me so, you can write any section of your liking, or write about anything you want. You will recieve further information, such as the issue date.

Have a nice day.

Great! Thanks! The due date is November 6th, so there is still time. You will get a warning when the date is approaching. You can write about any topic you want :) --

snickers challenges you to a duel will you defend your honor? Super-Yoshi

Hello, I'm Pwwnd123 and I am a starter user on Mario Wiki[edit]

Hi,Groden I am Pwwnd123 and I am a new Mario Wiki user and I am an YouTuber and I hang out on the Mario Wiki chatroom. -Pwwnd123