From the Super Mario Wiki, the Mario encyclopedia
Jump to navigationJump to search
Don't fall for this...(No seriously, don't!) 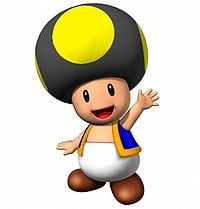 Please turn off all cell phones and please no smoking.

I am HyperToad the one and only. I'm quite an inactive user here, prefering to spend my time over on Userpedia, where I make comics and such. I'm gonna try to be more active here.

I originally came to this wiki as CrazyKong, simply to add something to the Swanky Kong article. Then I lost my password an became Gowser. Thanks to the ultimate overlord of all MarioWiki I became HyperToad.

I haven't done much, and I mostly edit anything I'm firmiliar with that needs editing. These include Yoshi's Island DS, Donkey Kong 64, and Super Smash Bros..

UPDATE: I'm not dead. I retired but may come back during the summer. I wonder if any of my old friends are still here...

Also be sure to check out my sub-page: User:HyperToad/FQRVAOMI.

Over on Userpedia I make several comics and things. My most notable project is MarioWiki: Clash, my first comic. It's page can be found here. In the comic, a fanon group called Blood's Legion are introduced.

My planned second comic, MetalMarioWiki was canceled prior to it's release. It was set to involve a "MarioWiki band". I might revive it one day.

I was attempted to make a comic called Attack of the Micro Goombas, a title actually thought of by Crypt Raider. I created a sub-pages here on this wiki, but the comic failed and I canceled it.

Since then, I've started a project called Sonic Wiki, where MarioWiki user are all in "Sonic forms", which are a small fad on Userpedia. I canceled this due to lack of personal intrest.

I also created "Darkman", a parody of Batman starring DarkInsanity.

Me on Other Wikis

I join nearly every wiki I find. Here are links to my userpages on various wikis.

This section is under contruction. Watch for falling rocks.

Luigi is even cooler then Mario. He makes me laugh and needs more starring roles. That said, it's nice to see him as a NPC in some games such as Paper Mario. He's also an awsome fighter in the Super Smash Bros. Series, and a cool Final Smash Plus, he has a wicked cool alter-ego: Mr. L.