From the Super Mario Wiki, the Mario encyclopedia
< The 'Shroom:Issue 116
Jump to navigationJump to search

If you're American, Happy Thanksgiving! I hope you have a great time with your friends and family. If you're not American, then it's probably a pretty run of the mill month. Why not do some Fun Stuff to pass the time?

I'm pleased to announce that PoweKamek (talk) and Mr Squid (talk) have joined the Fun Stuff. They are writing Crossword and Guess That Game!, respectively. Welcome to the team! Additionally, due to your requests, Silly Stories, By You! will be returning for the holidays.

Thank you all for voting Guess Who! as Section of the Month! LudwigVon (talk)'s Mystery Images was also very popular. Keep up the great work, everyone!

Thank you to everyone who participated in our feedback poll! Here are the results.

It appears that you all enjoy Mind Games, so we'll be sure to implement more of that in the future! As previously mentioned, Silly Stories, By You! will be returning for the holidays because of your requests. The rest of the suggestions will also be looked into and considered. 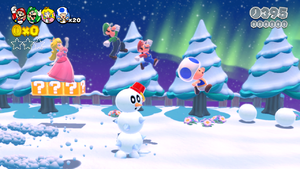 Peach, Luigi, Mario, Toad, and Snow Pokey rushing to submit for Silly Stories, By You!

Thanks to your requests, Silly Stories, By You! will be making a return for the holidays! Click the link the below to go the the Google Form and submit your ideas. Your suggestions will be transformed into a merry Mario Christmas story next issue.


Hi there! Welcome to Word Search. This time around, you’ll need to find Mario’s partners from the Paper Mario series. Good luck!

Hi everyone! It’s November now; man, this year has gone by fast! I hope you all enjoy your Thanksgiving. Enjoy this crossword puzzle, which is based on Mario Games!


Hey there, everyone! Wow, I can't believe that it's been a year since I started making mazes here at The 'Shroom. My first maze was that of a Tanooki Leaf. To keep the November fall feel, I wanted to think of different settings in Mario that had a leafy feel to it. What came to mind was the Maple Treeway track from Mario Kart Wii. That being said, here is a Wiggler to commemorate 1 year of me being involved with The 'Shroom. I thank everyone who has supported me, and I wish you all a happy fall.


Greetings, readers, and welcome to Picross: "pretty challenging" edition. This month, I have a special challenge for you. This Picross is bigger, stronger, and faster too. It's actually only bigger, but it is hard to do. This mysterious character is trapped in a rectangle, so finish the puzzle and see what you can... rangle.

Hello there! Welcome to Mystery Images. There's no theme this month – it's just another normal section – but this doesn't mean you can’t have fun! Try to find out the character, the location, and the game that are hidden in the following images.

Thank you for coming here and playing! Come again next month.

Hello! I am Mr Squid! In this game, you have to guess the Mario game. For each round, I will give you the series the game is in, along with some clues about the game. It will get harder each round. The answers are at the bottom of this section. 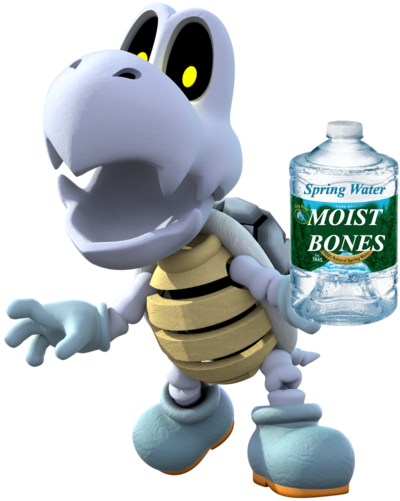 Nintendo recently released the NES Classic Edition, and it’s been selling out everywhere. And no wonder – it’s a highly nostalgic item for older players, while also being a cheap way for younger players to experience the classics. Nintendo’s 8-bit characters are extremely influential. Because so many of them are Mario characters, this month’s theme will be Mario characters that originated on the Nintendo Entertainment System.

How did you do? Regardless, thanks for playing this month's edition of Guess Who, and please check back December for a special holiday edition!


Welcome to Quiz, a place where I... quiz you, on Mario stuff. This month, unless you live outside of America, Mario Party: Star Rush was released, so I have devised a party quiz for you people. Please note, if you crack this quiz out at an actual party, even the booze will leave.