DELETE 10-0
This article is a total mess. There is a partconjecture template and a rewrite template because it needs a concise topic, the problem here is that there is no specific topic about a specific beehive. I suggest we delete this article and move the beehive item here since it will take priority and this one is more specific about something than this article right now. 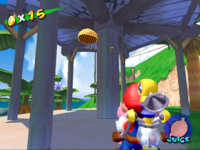 Can be merged with the renamed article in this proposal.

"Beehives in general fail the generic subjects guidelines." If that's the case, so do Cannons, as they are both generic recurring enemy/obstacle spawners. In DK3, YS, PM, SMS, and DKJB, Beehives all spawn insectoid enemies, and as such have an actual gameplay purpose. This really should be split back into "Beehive (item)" and "Beehive (obstacle)," with the info from YS, PM, and DKJB added/re-added to the "obstacle" article. Doc von Schmeltwick (talk) 09:55, 9 December 2017 (EST)