“One does not simply walk into Ultimate Mr. L's talk page.”
—Boromir

a. I reserve the right to edit out any words I deem inappropriate.

a. No insults, except in a playful manner.
b. No yelling.
c. No insulting other users' religion or personal life.
d. I reserve the right to delete messages that fail to adhere to this rule.

a. I prefer to have met my friends face-to-face, not just on the internet.
b. It is possible to get a userbox on my page, but for that to happen, you have to earn it by helping me out and just overall being nice.
c. Even if you think you've earned the right to have a userbox, please don't ask. I'll ask you.
d. I won't refer to anyone as friends. I call them co-workers or, in a joking manner, henchmen.

a. Try to follow the general rules of the wiki.

6. Messages will be answered both on my talk page and the messenger's, for archival purposes.
7. The page will be given an archive every 40 messages.

The Overlord will see you now. 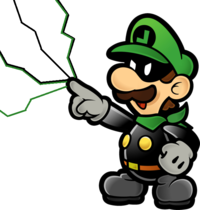 Ooh, the evil king of all charlatans. Do I look scared? Have at you!

There seems to be a coding error here, causing every text below to be centered. It's not the align template you two are using, I found it is your User:Ultimate Mr. L/sig page, as removing it caused things to be fixed. Looks like you're missing a few instances of </span>. You have two span code initiators, but only one span code closer for each set, so every instance of </span> needs to have another </span> after it. See if that works (unless you like having things centered, anyway :P).

Fixed it. Thanks a lot.

When creating an article, put as much effort and details or it'll be deleted. You have admitted to have no knowledge of this character with furthers the deletion. If you know don't much, don't create a rushed page. Read the Manual of Style to know more.

I'm sorry. I had prior knowledge of the rules regarding new stubs, yet acted anyway. I have no excuses. Thank you for notifying me.

The only Prima guide I have of the New Super Mario Bros. series is for Wii, so I unfortunately can't tell you how the others handle it right now. I believe Time Turner (talk) has the 2 & U Prima guides and Glowsquid (talk) might have the DS game's Nintendo Power guide, so you could try asking them if the giant Bowser has a name there. LinkTheLefty (talk) 11:00, 24 April 2018 (EDT)

Green Thunder is lesser to Purple Wind, and Daisy is the true SUPREME. If you can't see that, you've been sniffing around the Whoa Zone's sewer too long.

(Good luck with turning her into a Goomba though. She'd probably just go all headbonky.)
-Doc von Schmeltwick (talk) 00:10, 12 August 2018 (EDT)
Hey, there butterballs! Sorry, but I need more of a challenge than 20 Daisies. Maybe I'll fight a Goomba or something. Fawful, haul yourself over here to deal with these creeps.

Fawful is only having some of the power, but I am knowing that it is enough to KO all of you, a pile of stupid! I have chortles at such stupidity!

Oh hai Fawful, remember that time I punked your final boss/merged form with the magic window before you even got a chance to attack? Fuuuuun times.
Have fun with Bonechill in the section of the Underwhere reserved for loser bosses with too much buildup.
Doc von Schmeltwick (talk) 13:49, 13 August 2018 (EDT) 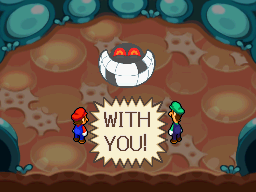 Guess that ends that... Well, back to plotting.

Oh, ok! I knew of this button, the problem is that the buttons are too close and sometimes (like always, lol) I apply changes. Sorry for it. I'll look at that next time. --

OK, well I better not catch any "becasue"s from you then (and in the ultimate case of irony, I actually spelled it right while attempting to misspell it). :P Doc von Schmeltwick (talk) 19:46, 28 August 2018 (EDT)

Consider yourself lucky it wasn't teh, or I'd have to sick Ultimate Dark Bowser on you. Or at least sue for copyright infringement. I take pride in weird things.

Thanks for the warning, but I never planned on watching any anyway. I'm extremely wary of YouTube and the internet in general.

I see. Well, if you wanna be able to figure out the actual Megabite locations, then I suggest you should play through some of the areas that take place outside and wait about 5 minutes within every area of each chapter, and you will probably see one. (You should also check 1-4, 3-3, 3-4, 7-3, and 7-4, cause I don't think there ever were ones there.)

Sorry for intruding on this conversation, but I checked some locations for myself. 1-4, 3-3, and 7-3 all came up empty, but I did see a Megabite at 3-4.
The preceding unsigned comment was added by Scrooge200 (talk).

Again, thanks! ^_^ However, I still don't know about the Megabite encounters seen in all the areas. I think I should check on Fort Francis again and see if there really is a Megabite there.

It was fun having you here, man. Take care!

It is not, in fact, a joke. I meant to change my status a while ago and only remembered when I saw what day it was. I'm glad you remember me, though. It was a lot of fun working with you. Keep editing, the wiki needs your dedication. Stay safe. L-ater.

i am dementicus have at you!

Summary: here i am This is a minor edit it is I dementicus I need help making my user page have at you! Dementicus (talk)