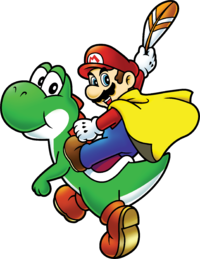 Keeping this image because it's honestly beautiful.

As the admin noticeboard is not working in this case, may you please block 104.247.134.48 (talk) while hiding their edits, as they have repeatedly vandalized pages for the past hour. Thanks! Doomhiker (talk)

The Turtle proposal will have to be revisited in four weeks, but in the meantime, I have some questions you could look into...

1) Would you happen to know if there is internal data in Bowser's Minions that points to Nokottasu being redesigned or replaced? I don't have the remake, and most filenames are probably not useful if previous Mario & Luigi games on DS and 3DS are any indication, but I figured it wouldn't hurt to check.

2) Do "Monty Moles" have a unique name in the Mario & Luigi RPG guide as well? The fact that the Nintendo Power and Prima Games guides generically call them "moles" could also make them analogous to Turtles, given they originally looked more like yellow Mega Moles.

Also, totally unrelated but I figured you'd know - what's up with Morton's third-person speech patterns after Paper Jam? Is this a newer change in localization as of Color Splash, or was the oddity always evident in the recent Japanese RPGs? (And his "Small Bowser" nickname for Bowser Jr. wouldn't be intended to be a "Kokuppa" reference, would it?) LinkTheLefty (talk) 13:30, 27 February 2019 (EST)

1) I don't have the internal data of the game, since I don't have a 3DS, and The Spriters Resource renamed it using the name from the Prima guide, at the moment I can't help there, sorry. You can ask Fawfulthegreat64 (talk), though, he uploaded some sprites from the game so he might have access to internal data.
2) Well, you're starting seeing the pattern, aren't you? Indeed, those moles have a different Japanese name: 「プレゼンター」 (page 98 is in particular dedicated to them, if you need at least one page from the book to cite, although they tend to be mentioned throughout the book). Pretty fitting for somewhat-Mega Moles that look like presenters and give you presents!
3) This is actually an interesting case: in Japan Morton since Paper Mario: Color Splash doesn't speak in third person at all! In that game he started using 「オラ」 to refer to himself and he continued doing so in Minon Quest and in Bowser Jr.'s Journey. I wonder why they localized that as third person... Regarding the Small Bowser part, at the moment I don't know where to look to find where the nickname is used since I plan to just follow an Italian playthrough that hasn't reached the Bowser Jr.'s Journey part yet.--Mister Wu (talk) 18:50, 27 February 2019 (EST)

I'm thinking the same thing, although I wonder if there is significance to the Presenter name possibly being a play on Pū instead of Choropū (perhaps Rocky Wrench was already considered to be a more direct Monty Mole relative?). I will ask Fawfulthegreat64 or Hiccup about the internal filenames since there's a chance they can be useful to know before the next proposal. The Morton bit is definitely good to know and would be a welcome addition to his article. Regarding Small Bowser - thanks to the localization, I have no idea if it is meant to just be a joke on Morton's vocabulary or if Nintendo was trying to get him to "pass the torch" to the newer Little Koopa, especially given that his English dialog also uses "LARGE BOWSER" for Bowser and doesn't always use "SMALL BOWSER" for Bowser Jr. I don't recall which worlds to look out for these lines, though. LinkTheLefty (talk) 20:17, 27 February 2019 (EST)

To clarify on Morton, he actually first used オラ in Paper Jam. It's also there that the Japanese equivalent of his "caveman speak" is introduced; one obvious trait is the lack of particle は. Color Splash makes it more obvious because that game has his dialogue entirely in hiragana. As for Junior, quickly skimming through the Japanese version of Bowser Jr.'s Journey I saw the Koopalings call him 「ぼっちゃん」 99% of the time, including Morton (the 1% was Koopa Jr.-sama in the post-credits Bowser battle). SmokedChili (talk) 15:12, 28 February 2019 (EST)

On a related note, Presenter moles' bonus dungeons have Spark-like enemies. What are they called in the guide? LinkTheLefty (talk) 18:30, 3 March 2019 (EST)

Additionally, there's the problem that in the original, they look like Li'l Sparkies, and in the remake, they look like the Smash design for Hotheads. Doc von Schmeltwick (talk) 19:31, 3 March 2019 (EST)

Also, is there any Japanese name for the Mysterious Mine Carts owner, or is he generically named? --

If it came from the sheet, it had to be cropped, by definition, as the rest of the sheet was removed. Cropping is not just the usage of the crop tool, it's the general removal of all but a specific part of an image. Doc von Schmeltwick (talk) 21:59, April 10, 2019 (EDT)

That's correct, but by not specifying from the sprite sheet, there's the risk to imply that the sprite is not the full sprite, but a part of it. I updated the description so that we can find a common ground.--Mister Wu (talk) 22:03, April 10, 2019 (EDT)

Since you confirmed on the "30th Anniversary Books Related Questions" section of your talk that the German encyclopedia uses the name "Mini-Wummp" to refer to the Pattan enemy, could I add that names to the "Foreign Names" section of the article? Thanks in advance. Power Flotzo (talk) 17:18, April 26, 2019 (EDT)

You can add said name: so far nobody pointed out there being significant issues with the German translation of the Encyclopedia Super Mario Bros., which means that said translation can be used as a valid source for German names.--Mister Wu (talk) 17:23, April 26, 2019 (EDT)

I did notice a potential issue with the German translation here, assuming the person was referencing the encyclopedia (actually, could you check the accuracy of those edits?). LinkTheLefty (talk) 02:47, September 20, 2019 (EDT)

Since the OCR of my translating app doesn't work anymore - it was based on sending the picture to a remote server to perform the OCR, and this part no longer works -, I'll need quite some time to che this, in any case I can already confirm that the second answer is no - the book doesn't go into such details, it's just focused on the walkthrough - while as far as the third question is concerned, the book doesn't deal with Mario & Luigi: Partners in Time.--Mister Wu (talk) 22:53, June 19, 2019 (EDT)

There are not many details to talk about, actually. The Super Mario Pia is a memorial book published for the 30th Anniversary of Super Mario Bros. by Pia Co., Ltd. (hence the name) and written in collaboration with Nintendo. It has a bit of a summary of each game of the Super Mario Bros. series (the same ones covered by the Encyclopedia Super Mario Bros.), it lists a few Mario series and it covers a few relevant characters and enemies in the Super Mario games as well. It also contains a few interviews (the lengthy ones are the interviews with Shu Yabushita, Eir Aoi, Mirin Furukawa, Takeshi Yourou and Takashi Tezuka, no interview with Miyamoto, Kotabe or Koizumi), it covers the Mario-related amiibo, a few 3D CGI character artwork we already have, a few Mario-related goods and a few Mario games you can play on the Virtual Console. It's not as important of a book as the Encyclopedia Super Mario bros. was, but we still could obtain a few interesting info from it, especially because the few characters covered have a list of the Super Mario games they appeared in, which can be interesting as Nintendo has since abandoned this character-centric approach in favor of rather listing the enemies and characters each game has, with the names they had at the time, as the Encyclopedia Super Mario Bros. showed.--Mister Wu (talk) 18:07, July 21, 2019 (EDT)

Hey! Could you block Koolaidluigi1879 (talk), please? He's been trolling us since yesterday. --

Just don't feed: report it on the adminboard and wait it out, and revert his changes in the mean time. --

As my recent proposal just passed may you make the changes to the {{Just released}} and {{New subject}} templates as specified on my proposal, as the templates are protected? Thanks! Doomhiker (talk)

Hey! Since the Scuttlebug does appear in Super Mario Picture Books, could you scan the pages where it appears it? I'd crop it. I am patient, but you can do it ASAP if you want. --

Here is the scanMedia:SMAGPB6 Cave SM64Enemies.png. Since it was useful as a source to confirm the Japanese names, I kept the scan uncropped. In any case, you can find the cropped images of the Scuttlebug and of the Chuckya hereMedia:SMAGPB6 Gasagoso.png and hereMedia:SMAGPB6 Horuhei.png, respectively.--Mister Wu (talk) 19:39, August 15, 2019 (EDT)

A while back, you said you didn't have the files of Yoshi's Island DS on hand to confirm what the Boss Bass / Cheep Chomp is called internally. Right now, there is a discussion on how to handle Big Cheep Cheep due to Porcupuffer's recent attributes in Super Mario Maker 2 as well as a stamp filename I found in NES Remix 2 and NES Remix Pack of Boss Bass with a name close to modern Big Cheep Cheep (Hanko_SMB3_PukupukuBig - though admittedly, it could have just been a simplified or shorthand translation of it anyway). As far as I've been able to ascertain, Cheep Chomp is always Bakubaku in 3D games, but I was interested in checking out Yoshi's Island DS due to the localization suggesting the original Boss Bass instead. However, I'm inexperienced with 2D ripping from DS games. If you are able to check at this point, could you confirm the Boss Bass and Bessie Bass filenames? If my hunch is right that there may be evidence of Boss Bass and Cheep Chomp sharing the same conceptual root, that should make things more straightforward. LinkTheLefty (talk) 11:25, September 26, 2019 (EDT)

Sorry that I’m replying only now, I haven’t been much on the wiki these days. I do have the files of ‘’Yoshi’s Island DS’’ now, though I’m mainly using the audio file names at the moment (they confirmed that the game featured a BakuBaku). I’ll try to have a look at those once I finished backing up a hard drive of mine.—Mister Wu (talk) 09:35, September 27, 2019 (EDT)

Thanks a lot! First of all, it’s great that they returned to the original name, considering how Nossie/Noshi is definitely a recurring species there. Furthermore, this matches the most recent romanization of Dorrie as well, looks like they adapted the romanization of the “saurs” to better reflect the relationship with the name of Yoshi. I’ll report your findings on the talk page of Nossie.—Mister Wu (talk) 17:46, October 24, 2019 (EDT)